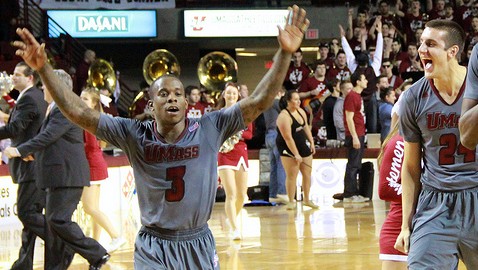 Friday night’s game between the Massachusetts men’s basketball team and Virginia Commonwealth was everything it was built up to be, and then some.

It was a much different reception from the last time UMass played at home, when it lost to George Mason 91-80.

“The crowd gave us that extra energy, that extra boost,” senior Chaz Williams said. “We felt like we let (George Mason) come into our home… and do whatever they wanted, so we didn’t want to let that happen again and we tried to limit that from happening and we just came out tonight and made a statement.”

Trailing by five points after the opening 20 minutes, UMass surged in the second half and outscored VCU 46-36 in the final 20 minutes. It was led by Williams, who scored 14 of his game-high 20 points in the final half.

The difference at the end came down to clutch free throw shooting by the Minutemen, who made their last six attempts from the charity stripe in the final 36 seconds while the Rams struggled to convert their attempts. VCU went 10-of-22 from the line, the major difference between a road win and its seventh loss of the season.

“I tell our guys, ‘free throws will win or lose you a game,’” VCU coach Shaka Smart said. “Tonight, you feel pretty good if you change that percentage to 70 or 75. It doesn’t guarantee you a win… but it’s tough in a tight game, a one-possession game, especially front ends of one-and-one’s and coming up dry on a two-shot foul.”

Winning that battle helped to counteract poor 3-point shooting from the Minutemen. They went 0-for-8 from deep, the first time a UMass team has not hit a 3-point shot in a game since 2006. The poor shooting from outside forced UMass coach Derek Kellogg to stop allowing his players from taking outside shots.

“The floor was open, Kellogg said. It was one of those deals of, ‘why settle?’” “We’re not a good 3-point shooting team at times anyway, so why settle for that? I thought we could get to the rim and use our slashing ability of (Derrick Gordon), (Trey Davis) and (Williams) to make plays.”

Runs by both teams controlled much of the first half and early parts of the second half. The Rams used a 13-4 run over a five-minute span to open up an eight-point lead before halftime.

The Minutemen took a six-point lead midway through the second half thanks to a 12-3 run. From that point forward, both teams jostled back-and-forth for position. The close-knit battle and similar styles of play led to four ties and 12 lead changes throughout the 40 minutes.

“I thought it was a well-played basketball game both ways, as far as intensity and it kind of felt like an NCAA Tournament game,” Kellogg said.
Treveon Graham’s 19 points and eight rebounds led the Rams, while Juvonte Reddic chipped in with 13 points and nine boards.

For the Minutemen, aside from Williams’ 20 points, they got strong offensive production from Gordon and Davis, who each recorded 16 and 13 points respectively. Davis’ scoring touch, including his clutch, pull-up jumper to give UMass a 74-71 lead with one minute, 30 seconds left had Smart praising the sophomore’s improvement from last year.

“He’s one of the most improved players in our league,” he said. “That’s not the same guy we played against last year. He’s a high-level, A-10 player now and that’s what you want out of a player.”