UMass men and women both finish sixth at A-10 Championships 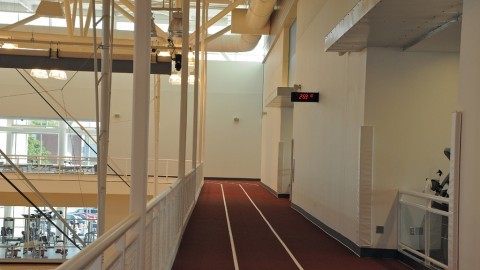 The Massachusetts men’s and women’s indoor track and field teams both finished in sixth place in the Atlantic 10 Championships in Kingston, R.I., with scores of 78.5 and 68, respectively.

George Mason claimed first place in the women’s competition, while Rhode Island ran away with first on the men’s side.

The meet was highlighted by strong performances from familiar UMass faces, including standout triple jumper Rebecca Stoyle. Stoyle came into the weekend as the defending champion in the triple jump and was the heavy favorite in the event.

As she did all year long, Stoyle dominated the rest of the field, winning gold with a jump of 41 feet, 11.5 inches, besting her own A-10 Championship record set last year.

The junior didn’t stop there. She also narrowly missed gold in the pentathlon, finishing in second with 3,526 points, just 84 points behind the winner, Louise Prevoteau, from Duquesne.

Stoyle was voted the A-10’s Most Outstanding Field Performer, it was the first time a Minutewoman received the honor since its creation in 2001. She is also the first member from UMass to win back-to-back indoor conference championships since Kristen Bakanowski won the pole vault in 2005 and 2006.

Fellow junior Courtney Kromko was close to Stoyle all season long, making up the other half of one of the most devastating one-two punches on the A-10 track and field scene.

Kromko took silver in the triple jump with a leap of 40 feet, 9.75 inches, a personal best that places her as the second best triple jumper in program history.

Rachel Hilliard is also a name that surfaced quite often this season thanks to her success in long distance events. She showcased her prowess at A-10’s by providing her team with points in both the 3,000-meter run (9:55.48) and the mile (5:02.58), finishing in sixth and seventh, respectively.

The 800-meter run was a successful event for UMass as Heather MacLean and Katie Powers earned points for it, MacLean finishing fourth in two minutes, 16.49 second, and Powers finishing eighth just four seconds back. Powers was also part of a sixth place finish for the 4×800 meter relay team. She teamed up with fellow junior Courtney Neves and freshmen Krista Webb and Deirde Martyn to post a time of nine minutes, 21.24 seconds.

The only scoring effort in a throwing event came from Kelsey Crawford, who finished fourth in the shot put with a toss of 43 feet, 11.25 inches.

Youth on display for Minutemen

The men’s team, but did so in a very different fashion.

Of the 12 scoring performances over the weekend, nine came from freshmen or sophomores, an indication that this team has plenty to look forward to in the next few years.

The Minutemen found the podium three times on Sunday and all of them came from track events. Stephen Bigelow produced the only silver for the meet with a second place finish in the 60-meter hurdles (8.10 seconds). Underclassmen Zack Grube and Zachary Blum also scored in the event, finishing in fourth and seventh place, respectively.

Bigelow’s performance was one of three all-conference efforts at the meet. Ben Groleau provided another with a third place finish in the mile (4:12.09) and Antony Taylor had the third, securing a bronze medal in the 3,000-meter run (8:25.42).

UMass coach Ken O’Brien put together another set of successful relay teams as the Minutemen scored in both the 4×400 and 4×800 meter races. Blum, co-captain Zachary Hildenbrandt, Pat Farnham and Deion Arneaud took sixth in the 4×800 with a time of three minutes, 32.97 seconds. Groleau Michael Maldari, Alex Finestone and Stephan Ness made up the 4×800 squad that placed fifth.

Besides its success on the track, the big story for UMass at the A-10 Championships was the performances of its two young heptathletes. Current Minutemen heptathlon record holder Nick Ingham, who is only a sophomore, and freshman Adam Bonfilio placed fourth and fifth, respectively, in the heptathlon over the weekend.

Bonfilio recorded the best score of his collegiate career with 4,587 points, a mark that pushes him to second in Minutemen history behind his teammate Ingham. Ingham scored 4,679 points, just short of his record performance of 4,731 points, which he set earlier this season in the same arena.

UMass’ season is not over yet as they will travel to Boston University for the New England Championships starting on Friday, Feb. 27.