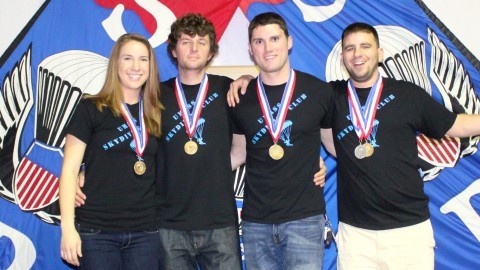 The winter months are often filled with news on the performance of the University of Massachusetts’s men’s and women’s basketball teams or the hockey team. Frequently overlooked is the UMass sport parachuting/skydiving team, which also competes during the winter season.

“Two-way is an event you only see at collegiate or other competitions intended for jumpers with fewer than 125 jumps,” said club member Derek Clougherty, an engineering student at UMass.

“That may sound like a lot of skydives, but people are just starting to gain awareness and the skills necessary to fly in close proximity to other skydivers.”

Sports accuracy, like classic accuracy, is the category in which jumpers attempt to land as closely to the target as possible.

“They have an electronic target out on the ground in the field,” junior skydiver Casey Tylek said. “They add up all your distances and the person with the lowest number wins.”

In formation, skydiving points are scored based on properly building specific formations between jumpers, while incorporating block moves and a dive pool or random.

“The randoms have a single formation, or picture, with specific grips on arms or legs,” Clougherty said. Block moves have both a beginning formation and an ending formation. There is a specific set of movements that must be performed between the two formations.”

UMass was successful in competing against these teams, despite its size. Tylek, Jennifer Shumway, Matt Leonard and Clougherty were the only competitors representing UMass.

In the sports accuracy category, Tylek took silver in the novice class, while Leonard took gold in the master class, according to Clougherty.

In the two-way category, Shumway and Tylek won gold.

“During the competition they set both a state and national record with 22 points in Round 2, destroying the previous record of 16 points which was set two years prior by competitors from Georgia Tech,” said Clougherty.

Clougherty and Leonard competed in the four-way category, picking up additional members from Georgia Tech and UConn, winning gold in this category.

The UMass members also competed in the six-way category as well as the two-way vertical category.

Competitors were more than pleased with the results of their competition.

“The competition brought a new energy to the club,” said Clougherty.

That being said, the skydiving club looks forward to more events and competitions in the future. UMass is collaborating with West Point in order to revive a competition that took place in the 1960s and 1970s, according to Clougherty.

“Hopefully we will be able to start a regional event as well. There are not many opportunities on the east coast for competition,” Clougherty said.

The club has around 100 members, according to Tylek. A majority of these members do tandem jumps while only five of the members have licenses to jump and compete at competitions.

In addition, the team hopes to expand the number of competitions it attends with the effort of improving their skydiving skills and the team’s ability overall.

“We were not really able to prepare for competition this year. All of us have rather busy schedules, finding time to go to the wind tunnel in Nashua, New Hampshire or even making it to Jumptown to make practice jumps together was difficult,” Clougherty said.

“Having multiple competitions gives you more reason to train and when you see where your competition is relative to your team’s ability, you push harder.”