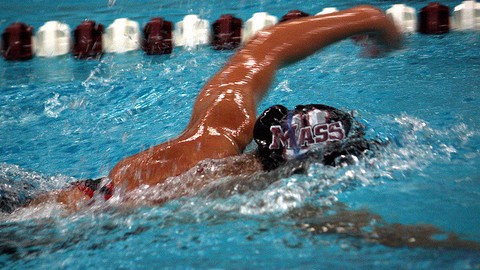 After a long, tiring season of preparation and hard work, the Massachusetts men’s and women’s swimming and diving teams are getting ready to take on the Atlantic 10 Conference Championships in Ohio, which begin on Wednesday.

Now that the regular season is over, it’s time to see if all that preparation has paid off.

On the women’s side, coach Bob Newcomb has complete faith that the swimmers are prepared for the championship meet. He believes his players have done all that they could to ready themselves throughout the season, and that they all have the right mindset heading into Wednesday.

“I think (the swimmers) are well prepared,” Newcomb said. “They are very relaxed. We just had a couple of really good sessions in the pool here in Ohio, and they just seem like they are ready to get this week going.”

During the regular season, the players train hard to get the right techniques perfected in their swimming while making the proper corrections with conference championships in mind. Now that the week has come, Newcomb said the main focus now is for the players to rest up.

In a light-hearted moment, Newcomb talked about the struggles the team has overcome, and then said he would retire barring the “perfect meet.”

“It has been a challenging year with a variety of injuries, but they have managed to come together,” he said. “If it’s the perfect meet, then I get to retire having had a perfect meet. If not, then I guess I’ll be back next year. I’ve never seen one.”

As for the men’s team, coach Russ Yarworth also has faith in his team heading into the tournament. Good preparation has helped UMass, as Yarworth says that the team is ready both mentally and physically for the week ahead.

“(Preparation) is what we do all year,” he said. “We work on our mental preparation and total preparation. We talked about really what focus they have to have, so we are very confident in both sides of that.

“All of the training we do during the year is focused on getting ourselves to the point where we are prepared mentally and physically,” Yarworth continued. “(The focus) is to get the kids prepared to swim fast.”

Neither coach really had any complaints about where their respective teams are in preparation. For Newcomb, he says it’s too late to do anything anyways even if he did have concerns. In Yarworth’s opinion, he doesn’t see much cause for concern if his swimmers give a “100 percent effort.”

Looking outside of the swimmers, both diving squads look impressive to their respective coaches. Michaela Butler and Josh Koppel are the favorites to be the most impressive in the championship outing, as they both seem virtually unbeatable after the seasons they both had.

When asked about Koppel, Yarworth had no choice but to recognize the leading men’s diver by saying that, “He has a good chance to be the top diver on both boards (3m, 1m).”