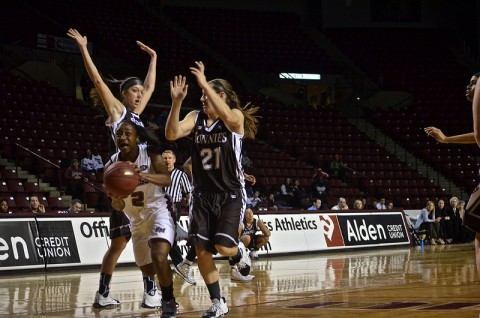 For both the Massachusetts and George Mason women’s basketball teams, the Atlantic 10 conference schedule has been less than favorable.

But when both teams meet for Wednesday’s 7 p.m. matchup, one team will finally reach the win column in conference play.

Despite the 22-point deficit in the loss to the Bonnies, Dawley said that she was encouraged by the Minutewomen’s defensive performance in the game’s first half. The team trailed by nine points and said that she thinks the success will carry over to Wednesday’s game.

Sophomore guard Jasmine Harris added that this defensive success was caused by a greater sense of “unity.”

“We played really well together,” Harris said. “The help defense was there, we were talking, we were switching … it was just an all-around good feel on the defensive end, which then translated to the offensive end as well.”

According to Dawley, UMass will employ two different lineups against George Mason.  Dawley said that a smaller-sized lineup using sophomore Amber Dillon at guard will cause matchup problems for the Patriots in terms of speed and guard play.

Dawley added that a bigger lineup consisting of junior forward Kim Pierre-Louis and freshman forward/center Kymber Hill paired with sophomore guard/forward Rashida Timbilla playing point guard will make it difficult for George Mason to defend in the post and rebound.

In particular, Dawley believes that Pierre-Louis, who scored a career-high 26 points in the loss to St. Bonaventure, will “be hard for (the Patriots) to defend and stay out of foul trouble.”

“I expect to see some bigger rebounders in the post, so it might be tougher to get those offensive rebounds,” Pierre-Louis said. “But I’m up for the challenge, and I really just have the mindset that I don’t think anyone can really guard me in our conference.”

As for what she expects to see from George Mason’s offense – which boasts three players averaging double-figures in points – Dawley said that limiting sophomore guard Taylor Brown, who is averaging 17.8 points per game, has been a point of emphasis in practice.

“We actually had a specific station devoted to her and about how we are going to defend her,” Dawley said. “She’ll probably get her 17 (points), but we can’t let her explode for more than that.”

Dawley said that the Minutewomen have also focused on junior forward Sandra Ngoie (12.3 points per game), who Dawley described as “a really quick catch-and-shoot kid.”

As the opportunities to win in conference play dwindle, Harris said the team has extra motivation heading into Wednesday night.

“A lot of the losses that we’ve had, we know we were the better team,” Harris said. “So, we’re going with that same type of mentality into Wednesday’s game.

“Whoever wants it more will get it. I think that’s what the outcome is going to be, and hopefully we get this win.”