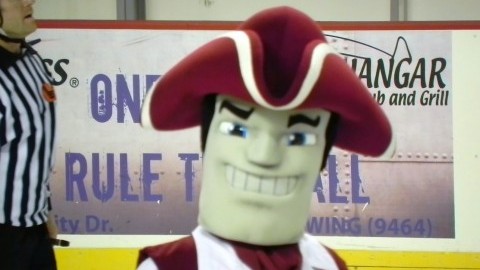 To the student body, there is only one face of Sam the Minuteman, the University of Massachusetts mascot.

Sam’s job is fairly clear. His role in the crowd at nearly every large-scale event that takes place at the University is unmistakable. Although silent, one can always find Sam giving high-fives and posing for pictures with students, family and other members of the crowd at events like New Student Orientation and UMass sporting events.

What most people do not know, however, is the face – or multiple faces – behind the suit. The job has been held by various students in the past, including Josh Duboff (UMass Class of 2007), who brought Sam all the way to the Capital One All-American Mascot Challenge in 2006, according to the UMass Amherst Magazine for Alumni and Friends. Since then, Sam has been taken over by students eager to continue the tradition.

Emily Goonan, a freshman Sustainable Food and Farming major, is currently taking on the role of Sam. Goonan shed light on what it is really like to be the University mascot.

“It’s so much fun because you forget that people can’t see who you really are, but they’re so excited to see Sam.

Everyone comes over for high-fives and hugs and pictures,” said Goonan, who first took on the role as Sam at the beginning of the semester.

Goonan is one of four undergraduate students whose job it is to be Sam.

“We got an email at the beginning of the semester of all the dates in the next couple of months when Sam is needed, and we just tell them when we can do it,” she said.

While there are technically no secrets to the job, there is one rule, Goonan said.

“We can’t talk,” she explained, and added that she learned this lesson her first time on the job.

“I made that mistake when I was walking outside of Boyden Gym. A man walked by and before I realized I wasn’t allowed to talk, I said, ‘Hello there!’ I’m pretty sure he was an important figure in the Athletics Department, and he told me, ‘Sam, you’re not supposed to do that,’” Goonan said.

“So I put my hands on the big head and shook it. That’s how I found out I can’t talk.”

Some of the biggest venues for Sam are sporting events. The mascot can always be found at hockey, football and basketball games at the Mullins Center and Gillette Stadium.

“Since the basketball team is doing so well, Sam has been needed a lot more, not just for the games themselves, but for things around the community relating to the team,” Goonan said.

Goonan said that playing the role of Sam is enjoyable and satisfying.

“I knew I always kind of wanted to,” she said. “It always seemed super fun.”

Goonan hopes to continue with her role as Sam, and she is particularly looking forward to being Sam during the upcoming football season.

“I’m hoping that as I stay Sam when I get older, I get to be Sam at bigger events,” she said.