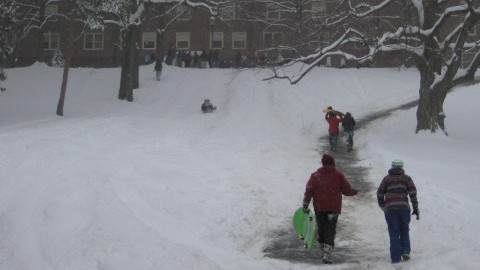 Students were awoken yesterday morning at 5:24 a.m., not by their alarm clocks, but by a message from the University of Massachusetts Office of Emergency Management.

“The University of Massachusetts Amherst campus is closed today, Wednesday, Feb. 5, 2014,” said the email sent to all students, faculty and staff.

According to the WGGB online weather reports, the Amherst area has received a recorded 7.5 inches of snow. Surrounding towns South Hadley and Ware received 10 inches and nine inches, respectively, according to WGGB.

Ed Blaguszewski, executive director of News and Media Relations at the University, shed some light on the cancellation process.

“The working assumption is that UMass stays open until we announce we’re closed,” explained Blaguszewski. “That’s what we share with the community every year, and that’s the process.”

Regarding the precautions that students should be taking while traveling on campus, Blaguszewski recommended, “People need to be cautious, and really need to be careful and just use common sense.”

“Make sure you’re well-dressed and prepared for the elements. Keep an eye out for snow removal equipment, because that’s the reason we’re closed, and they need to work efficiently,” said Blaguszewski.

At the University, all services across campus were closed with the exception of University Health Services, Counseling and Psychological Health, University Police, Campus Center Hotel and Garage, the dining commons, the Physical Plant, University Operator and the residence halls.

Organizations like the Massachusetts Emergency Management Agency and the American Red Cross Association of Massachusetts offered disaster readiness information as well as support for emergencies during the storm.

Kat Powers, director of communications for Boston Red Cross, provided ample insight on some of the tips and advice that the Red Cross offered to people during the storm.

“This particular storm was impacting folks’ ability to get to work,” explained Powers. “What we were doing was putting out safety-for-driving tips.”

Some suggestions that Powers mentioned included action plans for breaking down while driving in a storm like yesterday’s.

Powers emphasized the importance of leaving a blanket in cars at all times. She also suggested never running hazard lights while on the side of the road, due to the car’s limited battery life. Instead, she recommended flashing the lights “intermittently.”

Another suggestion that Powers offered was to keep a bag of cat litter in your car.

“If you have four-wheel drive, stick the kitty litter under the wheel to help it get un-stuck,” Powers explained.

Powers emphasized that the best way to stay safe was to stay at home. In the event that evacuation is required, Powers said, “Make sure you have an out-of-state emergency contact that knows where you are at all times.”

Powers also shared the process that the Red Cross takes during storms and times of emergency.

“We have specialties that come down who are training in feeding large numbers of people, helping shelter hundreds of people, etc..”

Based on weather conditions predicted to take place on Sunday, the Red Cross is having its volunteers stay on call until Tuesday, Feb. 11.

“Fortunately, we did not hear anything about major power outages,” said Powers. “Most people just stayed home. With this particular case, we were ready to go.”