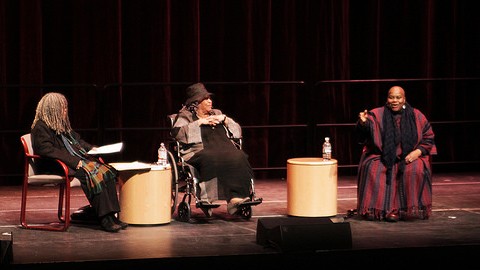 Toni Morrison, Bernice Johnson Reagon and Sonia Sanchez came to the University of Massachusetts on Monday evening to discuss the black female artist and her role in the 21st century.

This event was initially scheduled for February in recognition of Black History Month, but was postponed due to weather conditions. However, the artists’ conversation was still fitting for March, which is Women’s History Month.

The event was held at Mullins Center and was presented by the W.E.B. Du Bois Afro-American Studies Department. It was also sponsored by several organizations including the College of Humanities and Fine Arts, the Center for Multicultural Advancement and Student Success, Student Activities and Involvement and the Black Student Union.

Morrison, the author of 10 novels, has won multiple awards including the Nobel Prize for literature, the Pulitzer Prize and the National Book Award for her novel “Beloved.” Most recently, she was awarded the Presidential Medal of Freedom. Reagon is a singer, composer, scholar, social activist and founder of Sweet Honey in the Rock, an all-female, African American a cappella group.

Sanchez, a poet, playwright, professor and activist, is a major leader in the Black Arts and Black Studies movements. She is the author of 17 books of poetry and short stories and taught at Amherst College from 1972-75, where she helped establish the major in Black Studies.

The Voices of New Africa began the event by singing spiritual pieces, including “Lift Every Voice and Sing,” which is considered The Black National Anthem. Afterwards, the New Africa House Ensemble performed, followed by UMass Professor Emeritus Frederick Tillis on the saxophone.

Sanchez served as the mediator during the conversation, posing questions to both Morrison and Reagon. She introduced the two women to the crowd, commending them for their achievements in the arts, and then delved into the talk by asking Reagon to comment on her role as a musical artist.

Reagon began to sing to the audience, “We who believe in freedom cannot rest.” She then began to explain that despite a world filled with “racism, homophobia and greed,” she has found solace in the music she creates. The words she sang spoke of triumph; “Over my head, I see freedom in the air.”

After these songs, Reagon reflected on the march that she led in 1961 in Albany, GA. It was her first march as a part of the Albany Movement, a desegregation coalition led by local activists. During it, she said she sang the same spiritual words in fight for a better future.

Throughout the talk, Reagon described her childhood experiences of singing in church and school.

“I grew up in a church were there were no rehearsal. Someone started the song and someone joined in,” she said.

Reagon also asked the audience to join in with her and sing along several times throughout the conversation.

When asked about singing and what it meant to her, Reagon simply stated that music involves trusting and believing in other people, knowing when to begin and when to end.

“It is the thing that makes the most sense in my life,” she said.

For Morrison, literature is what makes the most sense. When describing the writing process, however, she said that she aims for what Reagon does all of the time – creating an artistic connection.

“You try to give the sound of a simple word, the ramifications, the echo, the frame, the inside, the outside – It’s not just typing – there is a music in it,” she said.

When asked who she writes for, Morrison emphasized the complexity of literature and described how she first encounters a situation and then must find out who is in it. She said that she begins to step inside of it and carefully select what to record.

Morrison continued by describing the role of language in the arts world today, its meaning and how a situation in a text can completely capture the attention of one person.

“The language has to be theirs … it has to be for the readers,” she said.

Toward the end of the talk, Sanchez thanked the women and the audience for participating in the conversation. She then asked the two women what their legacies are, and Morrison responded by saying that she has only taken an individual approach, and noted that she hopes to be remembered as a trustworthy and generous person.

Reagon then reflected on her “business” as a scholar, a historian, a singer and a writer, all of which comprise her identity.

She then said, “The legacy part, for me, will be what people make of it. I don’t worry about it.”

Julia McLaughlin can be reached at [email protected]