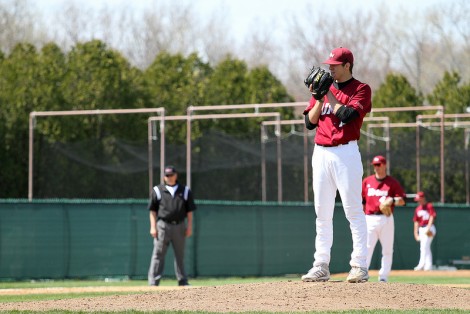 The Massachusetts baseball team fell to 0-6 in its young season, losing three straight to Maryland this weekend in College Park, Md.

UMass (0-6) fell 3-2 on Sunday in 10 innings, failing to escape a bases loaded jam in the extra frame. The Minutemen dropped both ends of the Saturday doubleheader, falling 10-1 in the second game and dropping the first game 4-0. They were no-hit by Terrapins (8-2) starter Jake Stinnett in the opener.

According to UMass coach Mike Stone, there are signs of incremental improvement in his team’s play despite the six-game losing skid.

“The result does matter of course, but we need to play,” Stone said. “We need to gain experience and play. Unlike the major leaguers in spring training, unfortunately, (these games) do count for us.”

On Sunday, the Minutemen ran into trouble in the bottom of the 10th. Aaron Plunkett, who pitched 51/3 innings in relief, allowed back-to-back singles to Terrapins batters Charlie White and LaMonte Wade and then hit Anthony Papio with a pitch, loading the bases.

Plunkett’s day ended after Papio’s at-bat. UMass senior D.J Jauss entered the game to a bases loaded, one-out situation. Jauss couldn’t put Mike Rescigno away, as Rescigno drove in the winning run on a ground ball to second base.

“What we were looking for there was a strikeout to start to get deeper out of the inning,” Stone said. “It was a playable ball and we just didn’t finish it.”

UMass starter Mike Geannelis allowed two runs, both of which came in the first inning, in his first career start. He lasted four innings and allowed those two runs on four hits while striking out a batter. Nik Campero cut the deficit to 2-1 in the third inning for the Minutemen on an RBI ground out. Kyle Adie tied the game in the fourth on yet another RBI ground out.

UMass freshman pitcher Ryan Maloney, who received high praise from Stone following his first career outing a week ago against Army, hit a snag in the fifth inning of Saturday’s back end of the doubleheader, which the Minutemen lost 10-1.

Maloney allowed nine runs on 11 hits in 41/3 innings. Maryland broke the game open in the fifth inning, scoring eight runs on seven hits behind triples from White and Brandon Lowe. The Terrapins entered the inning leading 1-0 after Wade scored on a sacrifice fly from Rescigno.

Despite the rocky fifth, Stone was pleased with what he’s seen from Maloney (0-2) in his two appearances.

Nick Sanford drove in the lone run for UMass, singling home Jon Avallone, who pinch-ran for Campero in the seventh inning. The Minutemen finished with five hits.

The Minutemen were victimized by Stinnett in the opening game of the series, failing to register a hit in a 4-0 loss. Stinnett struck out nine UMass batters while walking just two. He forced 13 ground-outs to just five fly outs and improved to 2-0 on the season.

“Oh, dominating stuff,” Stone said of Stinnett. “(He had) a real live fastball, great action and a very sharp breaking ball. He had command of three pitches and a good changeup.”

It was the first Terrapins no-hitter since 2008.

Geannelis, who was the designated hitter, and shortstop Vinny Scifo were the sole base runners for the Minutemen. Conor Leblanc pitched eight innings for UMass, allowing four earned runs on eight hits while walking two and striking out one.

Stone acknowledged that UMass has room for improvement at the plate, but said that generating offense will come as the team gets used to crucial in-game situations.

The Minutemen return to action against Davidson on March 7.