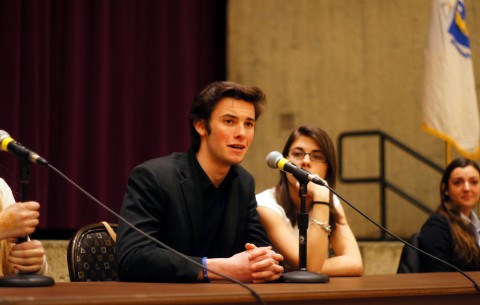 A Student Government Association ticket for president and vice president was taken off the ballot before polls opened on Sunday due to the confirmation of an active complaint.

Seth Perkins and Isilda Gjata, also known as “The Hammer,” were removed from the ballot on Friday morning in a unanimous 4-0 vote done by the SGA Elections Commission. One graduate student commissioner abstained from voting and a sixth member was absent.

Perkins currently serves as the Orchard Hill governor, with Gjata as his lieutenant governor.

According to Rocco Giordano, SGA elections chancellor, there were two active complaints against the “Hammertime” ticket – one involving misuse of Orchard Hill Area Government Funds and the other regarding alleged sexist remarks Perkins made about another ticket while campaigning at the Stonewall Center.

The Elections Commission allowed Perkins and Gjata to voice their side of the story on Tuesday but decided to suspend their campaigning privileges until the SGA Secretary of Finance had completed her audit of the OHAG.

Lindsay Vitale, secretary of finance, got written statements from three SGA senators asking her to take a look at spending because they had witnessed Perkins and Gjata giving out items at an event.

“(The senators) didn’t know exactly what those items were supposed to be used for or how they were purchased or anything like that, so that’s when they asked us,” Vitale said. “They believed (Perkins and Gjata) were doing something illegal.”

The audit performed by Vitale was of the entire Orchard Hill government in general – the statement given by the senators was not specific and only said that the government was not using their funds properly. One allegation was that Perkins and Gjata were passing out items while asking for signatures for their presidential and vice presidential campaigns.

When auditing a person or group, Vitale has to look at all of the purchase orders and receipts, and she asks the group for a description of all of the events that occurred with the money to make sure everything matches up and the money is being spent properly.

Vitale said that after examining the receipts, everything matched up and no money was missing.

“Basically what I was looking for was what the money was spent on when people go to purchase things,” she said.

On a card filled out before purchases were made, the Orchard Hill government said that they were going to be buying school supplies to draw people into a beginning of the semester event.

“The only thing was in those purchases when he said school supplies, they purchased other things such as headphones, which are not permitted as school supplies,” Vitale said. “They shouldn’t be approved.”

She added, “Nothing (on their purchase form) said headphones or (the adviser) would not have signed off on it.”

Using the three sworn statements from the senators with other interviews from witnesses, Vitale discovered that items were given to people who signed the nomination papers.

“(The witnesses) didn’t exactly say they gave them the items and then said sign their form, but they did then come back around and say could you please sign this and support us in running for president and vice president,” she said.

The Elections Commission was informed Thursday night that the audit of the OHAG had been completed, and it was “pretty clear” that Perkins and Gjata had used SGA funds to aid their campaign. This discovery prompted Friday morning’s vote.

“It’s never an easy decision to come to,” Giordano said.

He added, “It was something we felt was best for the integrity of the election.”

After the Friday’s decision, the Elections Commission sent a letter to the remaining five tickets in the campaign informing them of Gjata’s and Perkins’s removal, as well as warning them to keep their focus on their own campaigns.

“It would be both unfortunate and frankly disrespectful to both Seth and Isilda to form premature and misinformed judgments on their character based on their removal from the ballot,” the letter read.

The commission also wrote that the SGA has yet to come to a final decision on their choice of action on the matter and that Perkins and Gjata are welcome to run their campaign as write-in candidates.

SGA President Zac Broughton said that the Rules and Ethics subcommittee of the Administrative Affairs committee may be looking into an impeachment against the current governor and lieutenant governor now that the audit is over but it is still early in the process.

Under the authority of the secretary of finance position, Vitale is freezing the OHAG funds until further notice. The freezing of the Orchard Hill accounts, Broughton said, may put Orchard Hill’s annual Bowl Weekend at risk.

“We’re not trying to prevent this event,” Broughton said. “We want to make sure that it happens and that the programming and engagement between OHAG and the Orchard Hill residents goes on.”

Broughton and Vitale said that they would be working with OHAG closely over the next couple of weeks.

Vitale added that this is a rare occurrence but in the future auditors and the secretary of finance will work closely with treasurers of all on-campus groups and governments.

Perkins could not be reached for comment on the matter. OHAG Treasurer Victor Paduchak declined to comment.