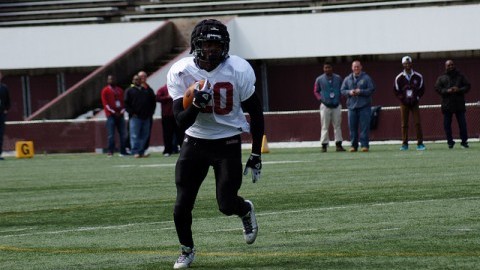 When Lorenzo Woodley looked at the numbers – 6,250 career rushing yards and 58 career touchdowns – he couldn’t help but get excited about learning from his newest running backs coach, former Massachusetts football star Marcel Shipp.

“I don’t know how he did it,” Woodley said with a grin.

Under the tutelage of Shipp and a new offensive system implemented by UMass coach Mark Whipple, Woodley is looking to become a star in his own right after a disappointing freshman year.

The 6-foot, 215-pound back was the prize of Charley Molnar’s 2013 recruiting class and entered his freshman season with incredible expectations. But nagging lower-body injuries limited him to just 314 yards and two touchdowns on 84 carries.

In the midst of his first spring camp, Woodley is excited for a new start. He used his freshman year to “get all the jitters out” and has spent the offseason in the weight room to physically prepare himself for his sophomore season.

“I feel like my injury has recovered tremendously since the season ended, but I’m still trying to get back to where I was before my injury,” Woodley said.

Despite missing four games and taking limited snaps, the Miami native said there was plenty to learn from his trying freshman season in terms of preparation, staying healthy and his overall football knowledge that he can apply both in practice and on Aug. 30 in the Minutemen’s season opener against Boston College.

“I’m gonna be a lot smarter going into the season learning how to read defenses, offensive schemes, learning how to read my blocks and physically being bigger, stronger and faster from all the winter workouts and the conditioning in the summer,” Woodley said. “I think I’ll be way more prepared than I was last year.”

Woodley may also be the biggest beneficiary of the Minutemen’s offseason coaching change.

After spending last season in Charley Molnar’s spread offense, Woodley is back in a pro-style offense under Whipple that is similar to the system he ran at Christopher Columbus High School, something he said he’s more comfortable in.

Woodley is one of six running backs expected to be on the UMass roster come training camp, and with the return of Jordan Broadnax and another highly touted incoming freshman in J.T. Blyden, the competition for the starting job will be intensified come August.

If Woodley can be the player that ran for 163 yards on 38 carries in his first-career start Nov. 2 against Northern Illinois, his spot atop the depth chart may be secured.

Whether or not he will be that go-to player out of the backfield next year is unclear, but he believes he’s ready for that kind of responsibility.

“I can be a workhorse and I can take over a game and wear down defenses,” Woodley said. “I just feel like 25 carries a game, that would be great. I feel like I can be that type of back that can carry the workload.”

It would make quite impression on his new coaches as well.