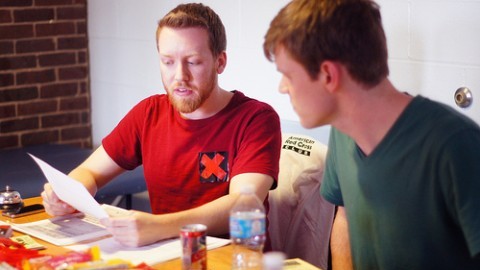 Crampton House was filled with donors and volunteers as the University of Massachusetts’ Stonewall Center and the UMass Red Cross Club held a community-wide Banned4Life blood drive on Tuesday.

According to its website, the Banned4Life Project focuses on repealing the FDA’s MSM policy, which bans men who have had sex with another man at least once since 1977 from donating blood for life. The FDA’s website cites increased risk of HIV, hepatitis B and other infections as the reasons for the policy.

“The club originally decided to become involved with the Banned4Life cause because several UMass Red Cross Club members and other UMass students were discouraged by the FDA ban on gay men from donating blood,” said Kristin Cheney, a senior biology major and president of the UMass Red Cross Club. “The policy banning men who have sex with men from donating was put in place over 30 years ago and needs to be updated.”

“We are always excited at the chance to work with another organization to raise awareness about LGBTQ issues on campus, and we want to do our part to end the ban,” said junior political science and communication major Eric Smith, who is an undergraduate staff member at the Stonewall Center.

Matt Martel, a junior BDIC student concentrating in event management and entrepreneurship, has been volunteering with the American Red Cross for five years and coordinated the event.

As social media chair for the UMass Red Cross Club, he reached out to both Blake Lynch, founder of the Banned4Life project, and the Stonewall Center to collaborate on a blood drive.

Martel hopes the event will help overturn what he sees as a discriminatory policy by raising awareness of the issue.

“Since tabling at the dining halls, more and more people have been taken aback about the policy and coming up to me, trying to get involved,” Martel said.

“Now almost every time I’m in Southwest, someone says to me, ‘The Red Cross doesn’t want my gay blood.’ And it’s almost like we’re being attacked for being part of the Red Cross when in reality it’s not a Red Cross policy, but an FDA one,” he continued. “It’s so sad because these students who are banned are healthy, they can save lives.”

In fact, Martel said, “(The) Red Cross is totally ready to go ahead with this,” in terms of repealing the MSM policy. “If this was uplifted, this could save so many lives. Every two seconds, someone needs blood,” he said.

Tony Tran, a junior psychology major, was a volunteer at the drive with the Stonewall Center and said they saw a great turnout.

“I hope the ban gets overturned,” Tran said. “Years ago, homosexuality was associated with promiscuity, but now we’re coming into a time when people realize that members of the LGBTQ community are just like anyone else who walks down the street and wants to save a life.”

Student donors who attended the drive were passionate about doing their part to help others.

Jennifer Raichel, a sophomore studying environmental science, is a 12-time donor. “I donate blood because I’m not an organ donor and this is my way to do my part,” she said.

“By just donating blood, you save three lives,” freshman accounting major Bill Sennott said. “People think that as one person, you can’t really make a difference. But that’s not true. To those three lives, you’ve made all the difference.”

The Banned4Life project began when Lynch was turned away from donating blood for a friend because he was gay. The goal of Banned4Life blood drives are to raise awareness about the MSM policy, and for eligible donors to give blood in honor of those who cannot.

“Banned4Life is more than a rights movement,” Lynch said in a press release. “It is a reminder that everyone can be affected by simple policies put forth by those who fear change.”