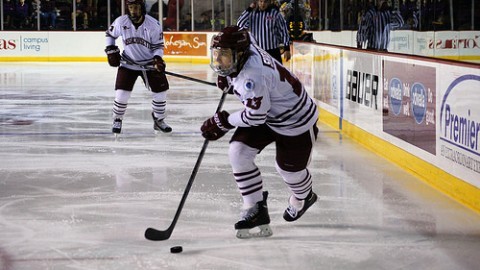 Conor Sheary has been an underdog throughout his hockey career.

Since he started playing youth hockey with the Boston Junior Eagles, Sheary has always been one of the youngest and certainly one of the smallest players on the ice. It’s why he didn’t make the varsity team as a freshman at Cushing Academy and why the thought of him playing Division I college hockey seemed so inconceivable at first.

However, after four successful seasons in Hockey East on the Massachusetts hockey team, the 5-foot-9, 175-pound forward will have another chance to silence the critics after signing an amateur tryout agreement (ATO) with the Wilkes-Barre Scranton Penguins – the American Hockey League affiliate of the NHL’s Pittsburgh Penguins – on Wednesday. He also agreed to terms with the Penguins on an AHL contract for the 2014-15 season.

“It’s the first step in the next phase of my career and it’s only a one-year contract so I still have to prove myself every day,” Sheary told the Collegian. “Next year I’m gonna have the opportunity to play and prove people wrong again. It’s something I like to live up to and I like to do it so I’m excited.”

Sheary is the second UMass player to sign a professional deal since the Minutemen’s 2013-14 season ended last Friday at Vermont. Fellow senior Joel Hanley signed a professional tryout contract (PTO) with the AHL’s Portland Pirates and made his debut on Wednesday night.

Sheary had offers from multiple teams at season’s end, but chose the Penguins on Tuesday morning because he said they appeared most interested in signing him and because he’s “only heard good things about the development that they do at the AHL level.”

“There was other offers, but nothing like this,” he said. “And I think I took the right one.”

Sheary leaves for Wilkes-Barre on Sunday and begins practicing on Monday. He knows there will be those who will doubt his ability to carve out a professional career, due mostly in part to his size. But it isn’t the first time he’s dealt with such criticisms.

“I always expect it, so I’m expecting it again,” he said. “But there’s gonna be other players that are gonna be my size and have already proven themselves so I just gotta be the next one.”

As for his own expectations, Sheary’s are always high. He’s hoping for a chance to play with Wilkes-Barre this season. But with the Penguins in the midst of the AHL playoff hunt with 16 regular season games remaining, he knows there’s a chance that may not happen.

Instead, he’s using this opportunity to gain some experience and adjust to a culture he knows little about. He recently spoke to former UMass teammate and friend Conor Allen, who signed a contract with the New York Rangers a year ago and is currently with the AHL’s Hartford Wolf Pack, to get an idea of what he should anticipate.

“(Allen) gave me a good feel for what I should expect when I’m down there and how the game’s gonna be played,” Sheary said. “But he can only say so much and it’s just something I’m gonna have to see for myself.”

Sheary led UMass with 28 points on nine goals and a team-high 19 assists as a senior co-captain last season, carrying the Minutemen through some difficult stretches and willing them to stay relevant through lopsided deficits and long losing streaks.

He served just two penalty minutes last year and scored his 100th career point – he finished with 104 for his career – on Feb. 14, becoming the 12th player in program history to reach the century mark.

It was a trying season and career for Sheary, who leaves UMass without a winning season or postseason victory, but his maturity as a player and person has grown significantly over that time, particularly as a senior captain.

“It’s something that I have that some people might not be able to say they did. It’s obviously something that’s gonna help me not only as a player but as a person,” Sheary said of his experiences as a captain. “It was a tough year last year, and it’s only gonna make you stronger. I think it just helped me overall, not only in hockey but away from hockey as well.”

Those four challenging years have culminated into an opportunity to fulfill his dream of playing professional hockey. The next step for Sheary is to answer the question of whether or not he can make it at this level.

But that thought is for another time. The only thing on his mind now is figuring out how he’s getting to Pennsylvania.

“I guess I haven’t thought of any goals since signing my contract. I haven’t really had much time to think,” Sheary said. “Right now, I’m hoping to get in the lineup and get some experience. From there, I always want to go up.”