Cower before the Yellow King 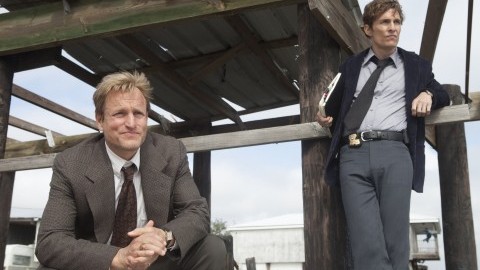 The following article contains spoilers for Season 1 of “True Detective.”

In “True Detective’s” riveting finale, we finally get our look at the long-awaited Yellow King, the specter that has haunted detectives Cohle (Matthew McConaughey) and Hart (Woody Harrelson) for 17 years. The big reveal comes after seven tensely written and impeccably acted episodes that built otherworldly hype around the serial killer. Writer and creator Nic Pizzolatto saves his best script for last. “True Detective,” more an eight-part epic movie than a television series, gets better with each passing chapter.

Pizzolatto and director Cary Joji Fukunaga capped off a groundbreaking midseason finale with the best episodes in the series. They deserve the lion’s share of credit for this success. Pizzolatto crafted an engrossing plot that was filled with nihilistic monologues and mystical cults. Fukunaga translated that story into a stylistic study of Louisiana’s shadowy underbelly.

More props must go to Glenn Fleshler, who joins the cast in the penultimate episode as Errol Childress, also known as the Yellow King. Fleshler portrays Childress as a scarred enigma, a mentally unstable maniac who’s smart enough to elude capture for 17 years. He’s an unhinged Hannibal Lecter who has learned to operate in the shadows, and he’s Pizzolatto’s ultimate ace in the hole.

Even more haunting, he and Cohle had an amiable exchange back in ’95 at the height of the Dora Lange case. Childress fades into the woodwork, and anyone he passes completely discounts him as a menace. He’s the perfect villain for a Southern Gothic.

Pizzolatto reserves the finale’s opening exclusively for a peek into Childress’ everyday life. Childress talks to his father’s tied-up corpse and keeps his mentally ill sister as a sex slave. Satanic drawings decorate the compound, scrawled in blood on the walls. It’s an important frame for when Cohle pursues Childress through the mythical Carcosa, an underground maze of horrors littered with bones and piles of children’s clothes.

Pizzolatto has proven himself a master of show, don’t tell, and with the look into Childress’ compound, he drives his point home in grisly fashion. It could have been a grave mistake to reserve so much time for a new character in the show’s 11th hour, but the finale never feels cluttered. In a way, Childress has been a character all along. The reveal provides the chance to see the evil we’ve been hearing about for so long.

The chase through Carcosa makes for the show’s best scene, creepier than the Dora Lange crime scene and more thrilling than the midseason’s mayhem. As Cohle tracks Childress, the latter’s voice hisses at the detective in the underground maze. It’s a scene more frightening than any horror show has managed to create.

Just as Cohle and Hart peel back the layers of Childress’s cult, the show slowly sheds light on our detectives. Turns out, 1995’s fabled gunfight that rewards them with regional glory was little more than a lie to cover up Hart’s foolish blunder. With this scene, Fukunaga provides more evidence that he’s a master of style. I cringed when Hart finds captive children. I cringed even more when he impulsively shoots his suspect to death.

We finally see the heroes’ falling out in 2002, which (somewhat disappointingly) was over Hart’s wife (Michelle Monaghan). Given the complexity of the rest of the show and its endless creativity, I would’ve liked a more original source of conflict. How many times have we seen a love triangle come between protagonists?

Barring Hart’s quick recovery from an ax to the chest, Pizzolatto wisely toned down his characters’ invulnerability. Before the midseason, they were untouchable. Hart cheated on his wife and she kept him by her side, while Cohle was just too cool to get hurt. In 2002, Hart’s demons drag him down, while Cohle collapses and withers away. They finally find the straws that break their backs.

Both McConaughey and Harrelson deserve an Emmy for their performances. The final hospital scene is a beauty. Cohle’s speech about his daughter’s presence will have you shedding more than a few tears. Hart proves he is a true detective like his troubled partner.

In the end, I have to give the most praise to the small names: Fukunaga, Fleshler and Pizzolatto. They load the final hours with style, terror and texture. Fukunaga, who cites David Lynch as an inspiration, proves he’s a director on the rise. If I ever need to cast a serial killer, I’m calling Fleshler.

And Pizzolatto, who wrote every episode on his own, is a master of the written word. He crafts a beautiful and mesmerizing story. His concluding dialogue between Cohle and Hart eases the show to a graceful finish, a scene that echoes the tone of the preceding episodes. Together they stand, dim beacons of light enveloped in the dark of the night.