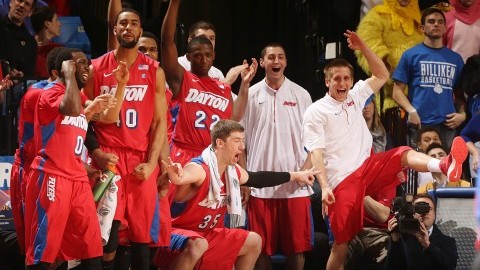 The Dayton men’s basketball team defeated Richmond on Saturday, 60-48, on the Flyers’ Senior Night at UD Arena, aiding their prospects of a bid to the NCAA Tournament.

Without Spiders (18-13, 8-8 A-10) leading scorer Kendall Anthony, who was forced to sit with two fouls with nine minutes, one second remaining in the first half, the Flyers asserted themselves and never looked back.

Once Anthony was sidelined, Dayton sprinted to a 13-0 run, the final two points coming when freshman Kyle Davis finished a fast-break layup, pushing the Flyers’ advantage to 24-10 with 4:25 left in the half.

Anthony trimmed Dayton’s lead to 50-42 with a 3-pointer from the wing with 6:22 left in regulation. Sanford then scored seven of the game’s next nine points to seal the victory for the hosts.

With the victory, the Flyers secured the No. 5 seed in the upcoming A-10 Tournament. Their Ratings Percentage Index (RPI) also jumped from 56 to 41,  significantly benefiting a squad on the NCAA Tournament bubble.

Both Dayton and Richmond take the court on Thursday in the first round of the A-10 Tournament at Barclays Center in Brooklyn, N.Y. The Flyers will face Wednesday’s George Mason-Fordham preliminary round winner, while the Spiders will take on No. 10 seed Duquesne.

SLU’s  Jett earns A-10 Player of the Year

A two-time former member of the A-10 All-Defensive Team, Jett’s superb defense has been acclaimed throughout his Billikens career. Jett increased his offensive production in his final season for the regular-season conference champions.

Jett finished the 2013-14 regular season in the top-20 in the conference in scoring, averaging 13.8 points per game. That number spiked to 17 points per game in conference play. He was also third in assists (4.7 per game) and sixth in steals (1.5 per game).

Jett’s all-around performance carried the No. 18 Billikens to a program-record 19 consecutive victories. He was the primary contributor to his squad, which earned the top seed in the conference tournament.

Teammate and senior forward Dwayne Evans joined Jett on the All A-10 First Team, along with UMass senior point guard Chaz Williams, Saint Joseph’s senior guard Langston Galloway and VCU junior guard Treveon Graham. Saint Louis’ Jim Crews was named Coach of the Year. The awards were selected by the league’s 13 coaches following the regular season, which concluded on Sunday.

Yoni Monat can be reached at [email protected]