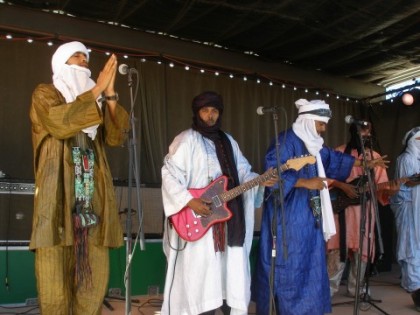 This Thursday night, Saharan desert-rock band Tinariwen will perform at the Iron Horse Music Hall as part of an ongoing world tour in support of their new album, “Emmaar.”

Hailing originally from the vast deserts of northern Mali, and drawing from the different sounds they heard during the years they spent living in different regions of northern Africa, Tinariwen are an entirely unique band. They effortlessly combine the spiritual music of their native Tuareg people, Arabic pop, Moroccan chaabi protest music and western pop and rock music into a tantalizingly original concoction that has won them worldwide acclaim and success.

Although Tinariwen have only in the last few years come to international attention, the band dates all the way back to 1979. Tinariwen’s story, one that the Irish Times described as “the most rock‘n’roll of them all,” is as fascinating as their music and helps Tinariwen’s western fans understand the context that surrounds their songs.

Founded by Tuareg refugee Ibrahim Ag Alhabib in Tamanrasset, Algeria, Tinariwen were at first a loose quartet of guitarists who formed to play at local weddings and parties. Without even a name, they began to develop a reputation amongst locals, who dubbed them “Kel Tinariwen,” which in the band’s native Tamasheq language translates roughly to “The Desert Boys.” The collective soon moved to Libya, where they, amongst other Tuareg refugees, received nine months of military training from Muammar al-Gaddafi’s army. Relatively safe in Libya, the quartet soon met other Tuareg musicians who were active in the Tuareg people’s rebel cause.

Singing of the issues that faced the Tuareg, a race that had been expelled from Mali and been labeled as refugees virtually everywhere else, Tinariwen’s membership swelled to approximately eight, with various members consistently coming and going. During their stay in Libya in the 1980s, Tinariwen vowed to record music free of charge to anyone who supplied a blank cassette tape. The resulting tapes were heavily sought out for in the Sahara region, and bolstered the collective’s reputation across a much wider locality.

In 1989, Ag Alhabib and the collective left Libya to return to Ag Alhabib’s home village of Tessalit, Mali. Ag Alhabib had not been to Tessalit since 1963, when, at the age of four, he witnessed the execution of his Tuareg rebel father at the hands of the Malian army. In the subsequent Tuareg rebellion against the Malian government, some of the members of Tinariwen participated as rebel fighters. Once the violence quieted down, Tinariwen settled more firmly in Mali, cementing their reputation further by performing to Tuareg groups all across the Sahara.

In 2001, Tinariwen first came to international notice with their headlining performance at the Festival au Désert in Essakane, Mali. The attention from the festival enabled them to record their first album, “The Radio Tisdas Sessions.” After 22 years of making music, Tinariwen were finally able to reach ears across the world.

With each subsequent album, Tinariwen’s unique and stunningly evocative sound has won them not only increasing critical success, but celebrity supporters like Carlos Santana, Thom Yorke and Chris Martin. “Tassili,” their 2011 album, featured guest vocal spots from New York indie rock band TV On the Radio, and won the collective a Grammy the following February for Best World Music Album. “Emmaar,” released earlier this year on Feb 11, plays into Tinariwen’s greatest strengths. Guitars, percussion, and the band’s almost circular melodies and harmonies envelop the listener like a sandstorm. Six albums and 35 years into their career, Tinariwen have never sounded better.

Tinariwen will be joined by English afro-pop band the Melodic. Doors open at 6 p.m. and the show starts at 7 p.m. Tickets are $30 in advance and $35 at the door.