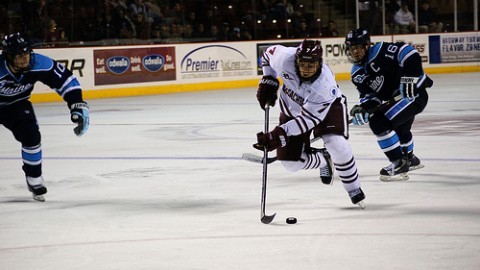 The senior had just finished his final season with the Massachusetts hockey team a week ago, and planned to go to Connecticut on Saturday to spend his week off from school back home while he waited to hear from some American Hockey League suitors.

By 11 a.m., his plans changed significantly.

Pereira received a phone call from the San Jose Sharks, who told him he had to go to Worcester right away to join their AHL affiliate on an amateur tryout agreement (ATO) and play in their game in Bridgeport, Conn., that night.

Just like that, Pereira was making his professional hockey debut.

“San Jose was gonna let me know over the weekend so I was like, ‘OK, Monday I’ll find out or something,’” Pereira told the Collegian. “Then Saturday, I was about to go home for Spring Break and I got a call in the morning like, ‘Hey, you gotta get to Worcester. They’re playing at Bridgeport.’ So I had to drive all the way here, then drive all the way to Bridgeport.”

But Pereira has already made the biggest impact.

On Saturday, the forward played in front of his family and friends approximately 20 minutes away from his hometown in West Haven. He had three shots in the Sharks’ 4-0 win over the Sound Tigers.

On Sunday, Pereira told himself he had to produce in his home debut for the sake of his career.

Five minutes, 24 seconds into the second period, Pereira received a pass from Chad Rau in the neutral zone and went wide down the right wing. He used his speed to break away from the defense, shifted from backhand to forehand and moved quickly across the crease to beat Manchester Monarchs goaltender Jean-Francois Berube blocker side for his first career AHL goal to put the Sharks up 2-1.

“It’s good to get that first goal. It’s something that you won’t forget,” Pereira said after Worcester’s 5-1 win over the Monarchs at DCU Center.

“That’s what it takes to stay at this level,” Pereira later added. “People are fighting for a job here. It’s just one of those things where you gotta do the little things right. But a guy like me, I gotta produce.

“It’s good to get that first one out of the way and hopefully there’s more to come.”

Sharks coach Roy Sommer immediately took notice of Pereira’s speed, and likes what he sees out of the rookie so far.

“It’s two games, it’s hard to tell,” Sommer said. “Most guys are a little bit nervous when they come here, but he’s come in here and he’s been pretty good. He’s steady. He had a few turnovers, but overall I thought he’s played pretty good. He can skate at this level.”

Pereira’s situation is far from the dream, however. He’s been living in a hotel with teammate John McCarthy, who played with his brother, Joe, at Boston University, and knows that his spot on the team is far from guaranteed.

It’s the life of an undrafted player on a non-guaranteed AHL deal. Pereira is taking each practice and each game as a chance to prove himself, and knows that he can’t afford to regress at any point.

“I’ve just been keeping my mouth shut and just working hard, especially as the new guy.”

Despite the uncertainty, Pereira sees the success of former teammate Conor Allen, who already earned a stint in the NHL in the middle his first full pro season, and uses it as a reminder that the dream is well within reach.

“I’m just taking it as it goes,” he said. “The coaching staff plays me here. It’s special for them to think that of me. I can only earn more from here.”