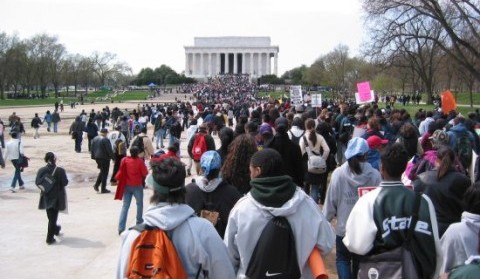 In 2003, the University of Michigan’s 150-point applicant ranking scale was challenged in court due to the automatic 20 points awarded to underrepresented minority students. Jennifer Gratz and Patrick Hamacher, white Michigan applicants in 1995 and 1997, respectively, were denied admission. They both attributed this to their white identities, claiming they did not receive equal treatment in the application process.

Gratz v. Bollinger was a pivotal Supreme Court decision in American history; by declaring Michigan’s point system unconstitutional, the Supreme Court’s decision changed the way admissions are handled across the country. In essence, by claiming that racial discrimination was being used against whites, the 2003 ruling institutionalized the concept of “reverse racism.” Since then, universities across the nation have followed suit in attempting to repeal their affirmative action policies. There are those who claim we are reaching levels of equity unseen in the past and argue that the need to recognize identity and inequality are unnecessary. They cling to the color-blind logic that convinced six of the Supreme Court justices to blatantly deny the fact that people of color are at a disadvantage when applying for and being accepted to college.

This is extremely problematic and it is proven in more ways than one. But before we discuss numbers, let’s adhere to common sense. People who do not identify, or do not “pass” as white have never had the same access to the resources and human rights as their white counterparts. For a long time, the rhetoric and justification behind this lack of resources was deeply embedded in American culture. Generation after generation was taught that certain people are less than human and thus do not need or should not be allowed the same living circumstances as others. It only became unlawful to discriminate based on race, color, religion, sex or national origin in 1964 – just 50 years ago. It is illogical to think that in only 50 years we have reached the promised land of an egalitarian society.

Affirmative action was implemented to hold workplaces, schools, universities and colleges and other sectors of society accountable for equality in each respective setting. Institutions had to be forced into this way of thinking; they did not come to this conclusion on their own. To suggest that “reverse racism” is being used to disempower whites is to ignore the history of this country’s infamous past.

In fact, it is decisions like Gratz v. Bollinger that confirm we are not there yet. We are not even close. Based on figures from fall 2013, of the 22,134 students enrolled at the University of Massachusetts, 14,700 identify as white and 4,117  identify as ALANA (African, Latino, Asian, Native American). Of those 4,117 minority students, only 795 (approximately 4 percent of the total undergraduate population) identify as Black or African American and 1,061 (or about 5 percent) identify as Hispanic or Latino. According to the U.S. Census Bureau data from 2012, 7.9 percent of Massachusetts residents identify as Black or African American and 10.1 percent of Massachusetts residents identify as Hispanic or Latino. Though these numbers do not address the many issues of diversity at UMass Amherst, they do show that the university’s diversity numbers are abysmal, and are not even reflective of the racial diversity of the Commonwealth.

Diversity, in its most simple and traditional definition must be addressed now – right now. It must also come from more than those whom it directly affects. Concern and action must come from those who have a stake in increasing interactions and communications with people from different backgrounds. We become better, more productive and more intelligent people when we do so and I think that no one can argue against the progress of society towards a brighter future.