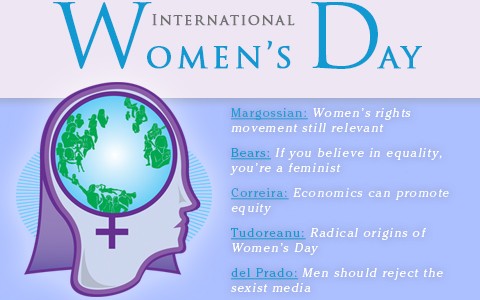 For International Women’s Day on March 8, the Daily Collegian’s Op/Ed Staff organized a special issue to discuss women’s rights, feminism and women’s place in global society today. You can pick up a copy of the print edition at on-campus and off-campus locations, and you can check out all the stories from the issue by clicking the links below.

Feminist economics can promote gender equity
Jillian Correira argues that recognizing and legitimizing unpaid labor, much of which is done by women, will help not only women, but also society at large.

If you believe in equality, you’re a feminist (whether you like it or not)
According to the dictionary, feminism is the belief in human equality, regardless of gender. Columnist Zac Bears argues that stating “I am not a feminist” really indicates a belief in the superiority of men over women, and that America won’t see gender equity until we change that cultural norm.

Men should reject sexist media
Julian del Prado argues that one way that men can help feminists is by refusing to consume sexist media, and using the power of consumer demand to affect change.