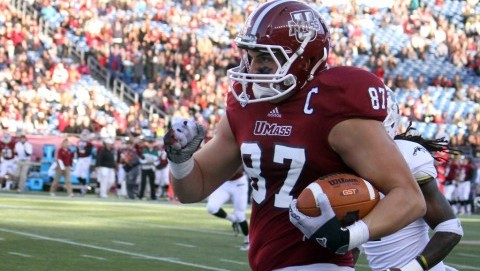 Rob Blanchflower has spent most of the last eight months watching.

In August, he watched as the Massachusetts football team – the one he was supposed to lead as senior captain – prepared for its 2013 season in training camp.

He then watched as the Minutemen were blown out in their first three games of the season.

After playing in the next five games, Blanchflower again watched as UMass was crushed by Northern Illinois on Nov. 2, and then watched the Minutemen lose what were supposed to be the final two games of his collegiate career.

Blanchflower went to Mobile, Ala., for the 2014 Senior Bowl in January and to Indianapolis for the NFL combine. But once again, he just watched.

On Tuesday, it was more of the same at UMass’ annual pro day at McGuirk Stadium as Blanchflower continued his lengthy recovery from a bilateral sports hernia that has spoiled what was supposed to be a memorable senior year by sitting out the event under the advice of doctors, agents and coaches.

“It’s killing me. I’d love to be out there,” said Blanchflower, who will have a private workout on April 23. “I know what I have to offer and what I can do physically and I just don’t have the opportunity to fall on it yet. I’m looking forward to the day that comes that I can show what I’ve got.”

Blanchflower missed six games last season due to injury, but still finished as the program’s all-time leader in career receiving yards for a tight end with 1,164, passing UMass Hall of Famer and All-American Milt Morin in his final game on Nov. 16.

Although Blanchflower couldn’t perform for the 21 NFL scouts in attendance on Tuesday, he’s confident that what he’s shown on film the last four years is enough to get him noticed by coaches across the league by the NFL Draft from May 8-10.

“It’s not just 40 and bench press. That stuff gets glorified and put on TV, but I think anyone who knows anything about football knows that stuff doesn’t really matter.”

Blanchflower later added: “It’s frustrating and not the most positive thing not being able to perform here, but I think at the end of the day teams know what I have to offer. They’ve seen the film. I’ve been playing for four years at the Division I level. I think film doesn’t lie.”

Fortunately for Blanchflower, this year’s draft is two weeks later than in the past, which buys the tight end more time to recover and hold his individual workout, where he will perform the standard bench press, 40-yard dash and other agility drills to send to scouts.

“That’s definitely a blessing,” Blanchflower said. “People always say the negative thing like, ‘That’s the worst. It’s terrible timing. You can’t do this, that and the other thing.’ I just look at it like thank God the draft got pushed back a couple weeks because I know I’m gonna be ready at that point.

“You gotta look at the glass half full, because if you’re a negative person, if you’re a pessimist, you’re not gonna make it in the NFL, one of the most competitive business environments in the world,” he continued. “You gotta have a good head on your shoulders, you gotta be level headed and think more with your head and not with your emotions because every emotion in my body is telling me I should go out here and run and do the things I know I can do, but I’ve been advised and I made the mature, correct decision.”

Clemons, Dima and Anderson made their biggest impressions in the weight room, putting up 32, 31 and 31 reps, respectively, on the bench press.