‘Stand Your Ground’ must be repealed 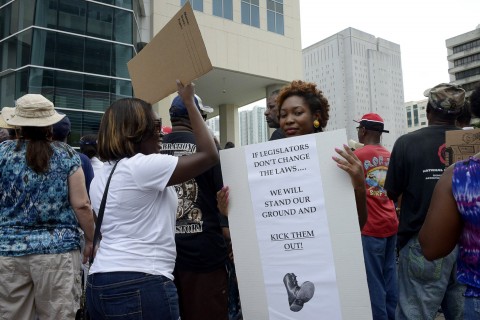 Let’s talk about Stand Your Ground.

Debate surrounding this controversial law didn’t die with George Zimmerman’s acquittal; it’s still as alive and volatile as ever. Let’s talk about how it not only is bad legislation, but also sets a bad precedent for behavior, telling Americans to shoot before they think, before they question, before they run. SYG is a puerile throwback to the Wild West, to cowboys; it’s a supposed homage to American individualism and freedom that is merely an excuse for vigilantism. Too often, it serves only to accommodate the murderous tendencies of unchecked tempers, and it must be stopped.

Stand Your Ground has been marketed as common-sense legislation from day one. It’s all in the name. SYG is essentially a ramped-up version of self-defense, in which a threatened party can retaliate violently against an attacker or potential attacker without any duty to retreat. SYG can be applied to situations outside of the home; so if someone feels threatened on a residential sidewalk, or at a gas station, for example, they can open fire. Traditional self-defense laws, on the other hand, require the threatened party attempt to leave the dangerous situation whenever possible, and to only resort to lethal violence when their own lives are truly threatened.

The thought behind SYG is: why shouldn’t I have the right to defend my life from those who threaten it, in places I legally occupy? It’s a good theory, I suppose, but terrible in practice.

Everybody has a different trigger: what makes one person feel threatened may not affect another the same way. For some, provocation is the approach of a mugger bearing a weapon. For others, it’s a teenage boy playing loud music and not wanting to turn it down when asked.

Whether or not the person was legitimately threatened is at issue once the case comes to trial, but cases usually only come to trial once someone is dead. The main purpose then is the pursuit of justice which, so often, our “justice system” does not dole out.

Though its wording does not explicitly mention race (few modern laws do), Stand Your Ground is a racist law. How it is enforced and how cases involving it play out in the courts shows how it upholds the systems that reinforce racist beliefs and behaviors in the United States.

Living in a racist society means that, for example, some Americans see black people as inherently “threatening,” even if the behavior of the supposedly threatening individual is not even remotely close to dangerous. Americans have, by and large, been trained to believe that black people, and black teenage boys especially, are naturally inclined towards mischief and, worse, violence. This stereotype has become the de facto excuse for so much modern racially-motivated violence.

It’s why George Zimmerman started to follow Trayvon Martin. It’s why Michael Dunn told Jordan Davis to turn down the loud music in his car before he unloaded his bullets. It’s why Renisha McBride was shot point-blank in the head with a shotgun after knocking on a Michigan man’s door, looking for assistance. It’s why a similar fate befell Jonathan Ferrell, who was shot by Charlotte police while looking for help following a car accident.

There are too many stories like this, in which the first inclination is to kill, instantly, no questions asked, especially when confronted with a “threatening” individual. And this way of thinking is why George Zimmerman was acquitted, why the jury couldn’t come to a decision in the murder of Jordan Davis, declaring a mistrial despite what appears to be some pretty strong evidence, though it did find Dunn guilty of other charges that will lead to a prison sentence.

This is also why Marissa Alexander, a black woman, was slammed with 20 years in jail for firing mere warning shots at her abusive ex-husband after he verbally threatened to kill her. Of all the cases, this seems to be the kind that SYG was made for. Thankfully Alexander has been granted a new trial, after spending more than a year in jail.

Even if Trayvon Martin punched George Zimmerman, or Jordan Davis said something to set off Michael Dunn – even if Renisha McBride knocked too aggressively or Jonathan Ferrell’s body language as he approached police was misread – what does it say about our society that we think that we should have the right to respond to these “provocations” with such disproportionate violence? The answer to a punch is not a bullet, the answer to suspicion not a point-blank shotgun blast. Stand Your Ground would have you believe otherwise.

This isn’t just a Florida problem. This is an American problem and a human one. Asking that gun owners not turn their weapons on others at the slightest provocation is not a call to hand in your weapons or a move to disarm Americans. It’s a call not to murder people for senseless reasons, for no reason. It’s a call to mercy and to sanity.

There is a time and a place for lethal violence committed in self defense in response to a legitimate attack on one’s life. When a mugger brandishes his knife, or a home invader his gun, you do what you have to do to survive. But we as a society can, and absolutely need to, set the bar much higher than Stand Your Ground sets it, far above the racist murk it sits in now.