Stars bring their best looks to the Oscars 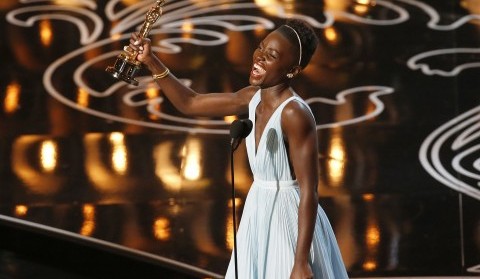 As always, award season would not be complete without the Oscars. Along with being honored for their accomplishments in film, the shows give celebrities a chance to showcase their style on the red carpet. This year was no disappointment as the stars graced the carpet in a varied array of designers, showcasing looks ranging from ethereal and classic to punk rock-inspired.

The most notable trend on the carpet this year was embellished neutral tone gowns, like those sported by actresses such as Kristin Chenoweth, Angelina Jolie and Cate Blanchett and, most memorably, E! News correspondent Giuliana Rancic and actress Kate Hudson. Rancic wore a Paolo Sebastian gown that was embellished with sequined flowers and a ball gown-style tulle skirt. The look was complemented by her Forevermark diamonds and the whole outfit made the E! red carpet host look like royalty.

Hudson, on the other hand, sported a white Atelier Versace gown with a plunging neckline and a low, caped back. The fitted gown was tailored perfectly to her body and was accented with both pearl and sequined embellishments. The classic look was pulled off with a modern twist: capes have been worn by stars like Lupita Nyong’o and Amy Adams during this awards season.

Other notable looks were sported by stars such as Anne Hathaway and, of course, this season’s breakout star, Lupita Nyong’o. Hathaway sported an edgier look in a fitted black Gucci gown embellished with a studded silver chest piece. The haltered gown was a change from the softer ensembles the actress usually wears but fit in with the grunge-inspired looks that have been in style this season. Best Supporting Actress winner Nyong’o was one of the best dressed once again, donning a light blue Prada gown with a plunging neckline and a crystal-embellished flowing skirt that look ethereal as she floated down the carpet. The look instantly caught the eye of many reporters, even prompting some to compare her to a modern-day Cinderella.

Although the gowns are the main event on the carpet, the men did not disappoint, with many adding their own twist to the traditional tuxedo. Ivory was one stylish color Sunday night, with both Matthew McConaughey and Ryan Seacrest opting for the light hue. Jared Leto rocked this look the best, opting for an ivory coat and shirt, black pants and a red satin bow tie and pocket square to add a pop of color to the monotone look.

Other notable looks came from actor Michael B. Jordan, who sported a custom Givenchy Haute Couture tuxedo that featured satin detailing with star embellishments. As usual, Brad Pitt looked handsome in a more traditional black Tom Ford tuxedo. He completed the look with slicked-back hair and a clean-shaven face. Chris Hemsworth stole the carpet in his burgundy three-piece tuxedo with black detailing, courtesy of David August. His black bowtie and slicked-back hair made him look like a true movie star.

While there were plenty of hits on this year’s red carpet, it wouldn’t be the Oscars without some fashion misses. Georgina Chapman opted for a white feathery look that left her looking more like Big Bird than a movie star, and although the look was brave, the shape of the dress and the amount of feathers were overwhelming, distracting from the actress herself. Liza Minnelli wore a confusing matching silk shirt and pants ensemble that made her look more Smurf than star. There didn’t seem to be much styling involved in the outfit, as the shirt hung too low on her frame and did not sit well on her shoulders. Its bright cobalt blue color didn’t help at all, making her stand out more than it should have in a sea of more neutral-toned gowns. There were signs that she was paying attention to detail as she rocked a matching blue stripe in her bangs, although her black matte shoes failed to do the same.

Best Original Song nominee Pharrell made a splash on the carpet earlier this awards season when he wore a huge Mountie hat on the Grammy carpet that was later sold at an auction, but it seemed that he was trying to upstage himself when he showed up on the red carpet in a tuxedo shirt and jacket – and shorts. From the waist up he looked pretty put together, but the shorts were more Bermuda-ready soccer mom than celebrity nominee. Down to his feet, the look was a little too bare as he opted for dress shoes with no socks. Maybe he was dressing in anticipation of the rain that threatened the carpet and didn’t want to ruin a nice pair of pants, but  either way, this look was just a little too casual for one of the year’s most prestigious events.

Overall, the best looks on the carpet Sunday night outshone the duds, and many of the styles showcased could be good indicators of the trends for the upcoming season. Based on the stars’ looks, we can expect to see more neutral pink colors this season, as well as the continuation of the popular punk rock trend.

Kathleen Mullen can be reached at [email protected]