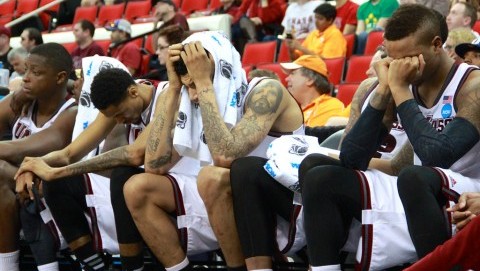 Abruptness can be an empty feeling, and it leaves you wondering a lot of things.

Last Friday, the Massachusetts men’s basketball team’s memorable season came to an abrupt end. That’s the downfall to making the NCAA Tournament. Lost amongst all the celebrations of being selected into the field of 68 is the idea that the next game could potentially wind up being the last.

As the UMass players, coaches and fans slowly watched the final seconds of its season tick away in a lopsided 86-67 loss to Tennessee in the second round of the tournament, that empty feeling was replaced with sadness. It will take time to get over that feeling because this season was set up to be so much more. But, when that feeling subsides in the coming weeks, the only thing to do is look forward to next season.

But what does next season have in store for the Minutemen?

Well, to start, seniors Chaz Williams, Sampson Carter and Raphiael Putney won’t be back. A shot at playing professional basketball somewhere is possible for the three. But when it comes to playing college basketball, that part of their lives is over.

However, there won’t be any shortage in leadership coming back from Derrick Gordon and Cady Lalanne. The two will return as the unquestionable leaders from this year’s team, both starting in all 33 games. But after them, that’s where the questions begin.

Sophomore Trey Davis and junior Maxie Esho showed glimpses of brilliance this season, but it’s still up in the air about how well their games can transfer from key role players off the bench to the starting lineup.

After making his first collegiate start in the NCAA Tournament, Esho mentioned that he didn’t feel comfortable starting in that situation.

As for Davis, he has one of the hardest jobs to fill. Should he become the next starting point guard for UMass, he’ll have to replace the shoes left behind by Williams. His play will always be compared to what Williams did in his three years with the Minutemen.

After those two, it will be interesting to see who steps up and in what capacity. UMass coach Derek Kellogg said time and time again this season that he wished he could’ve given his freshmen more minutes off the bench. Call it bad bench management or blame the team for never actually blowing out a team, but Clyde Santee, Demetrius Dyson and Seth Berger are going to have increased roles next season and will be expected to produce.

Then there are the mysteries that are Jabarie Hinds, Donte Clark and Zach Coleman. Any time players have to sit out a year for whatever reason, there is an immense amount of hype surrounding them.

Hinds is a 5-foot-11 guard who transferred from West Virginia and can shoot lights out. As for Clark, he will most likely slot in at a swing position at either the shooting guard or small forward. And Coleman could potentially fill Esho’s void off the bench as an energy guy who brings tenacious defense, but also has the potential to score the ball.

The only downfall with them is whether or not they’ll see the floor as much with so many players returning who can fill similar roles and had playing experience from this season.

And then there are incoming recruits C.J. Anderson and Rashaan Holloway. Both are highly touted and are expected to make an impact on the program during their time at UMass. It remains to be seen if that impact begins immediately or if they’ll have to wait a year and let some other players move on.

If there is one thing that is certain, there shouldn’t be a problem with depth on next year’s team. Kellogg may finally be blessed with a bench that will allow him to play up to 10 players a game.

But if there will be one thing missing from next year’s team, it will be the leadership that Williams, Putney and Carter had on and off the court. That impact simply cannot be replaced with the snap of a finger.

So in the case of the 2014-15 Minutemen, some questions about what’s next in line may take longer to answer.