UMass baseball adjusting to life without the injured Rob McLam 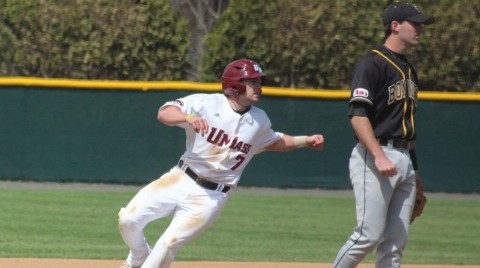 The Massachusetts baseball team has had a major hole to fill in its lineup in 2014.

Rob McLam, who is coming off a career year in which he was named to the Atlantic 10 All-Conference Second Team, tore his anterior cruciate ligament before the start of the season and has sat out with a medical redshirt.

The second baseman spent a majority of last season as UMass’ designated hitter, and his third spot in the batting order – a spot he held for all 45 games last season – has been missed by his teammates.

“Rob was our three-hitter, second team all A-10, a big part of our lineup, great kid and a good friend,” fellow senior Nick Sanford said. “So you know it’s tough to see him go down with an injury like that. He wishes he could be here with us but we’ve had to work around it.”

“We really don’t have the type of guy that can fill the three-hole the way that Rob did. He was a high average guy that hit for line drives and added speed to that spot,” UMass coach Mike Stone said. “We have guys who can hit the ball more as gap hitters but we don’t have a guy who can provide that speed that Rob did in that part of the lineup.”

Senior first baseman Dylan Begin, who leads the team in runs batted in (10), said the loss of McLam requires more than just one player to pick up the slack.

Begin said that there have been a couple of Minutemen that have stepped up for UMass offensively and defensively so far during McLam’s absence.

Sanford moved over from shortstop to second base to fill the void on defense and has had success at his new position, compiling a perfect fielding percentage so far.

“Our effort and attitude have been great,” Sanford said. “Our defense has been great. That’s something that we pride ourselves on this year. I know our bats will come around … and we’ll be alright.”

While Stone expected upperclassmen players like Adam Picard, Nik Campero or Begin to hit in the third spot at the start of the season, it has been freshman Mike Geannelis, who has also been a pleasant surprise at the plate. The right-handed pitcher is hitting .324 this season and has seen an increased role in the middle of the lineup.

“Mike has the looks like a guy who has a lot of pop in his bat from the left side of the plate so far,” Stone said. “He definitely hasn’t looked like a freshman this year when he gets up to the plate.”

Campero leads the team in hits (16) and total bases (21) this season and is also a strong candidate to see at-bats toward the middle of the lineup for the Minutemen.

Stone said he will continue to give opportunities to whoever can show a sign of steady production in the middle of the lineup.

“There hasn’t been a ton of consistent offense yet,” he said. “We have seen a couple spurts of offense out of some of these guys but we’re looking for guys to step up.”

Stone acknowledged the fact that the loss of McLam was a tough loss, but all the team can do is move forward.

“Rob is definitely a guy we will miss this year, but he’s gone now and we can’t change that,” Stone said. “Hopefully guys will fill in this year and he will come back next year healthy and ready to play.”

Chris Corso can be reached at [email protected] and followed on Twitter @ChrisCorso5.