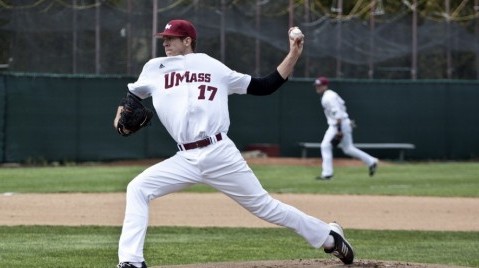 The Massachusetts baseball team will look to continue its positive momentum this weekend when it travels to Virginia to face Richmond and its powerful lineup.

Battling the difficult weather in Philadelphia, the Minutemen got their first A-10 wins of the season, taking two out of the three games against La Salle. Previously, UMass struggled scoring, averaging 2.38 runs over its first 13 games.

“We were finally able to get runners across and get some big hits from guys,” Stone said. “It is good to see the team coming around.”

While he feels like his team is improving, they have a tough test in an improved Richmond team this weekend.

“This team has been playing good baseball lately and it is going to be a tough weekend,” Stone said. “I know my guys will be ready to play and hopefully we can build on the series win over La Salle.”

The Minutemen will have an opportunity to improve their execution against a tough Richmond pitching staff, which includes Zak Sterling and Zach Grossfeld. Sterling has a 2.84 ERA in 31.2 innings of work, while Grossfeld has a 3.00 ERA in 21.0 innings.

UMass will counter with southpaw Conor LeBlanc, who is the leader of the Minutemen’s pitching staff. LeBlanc is 1-2 with a 3.67 ERA on the season. He has allowed 35 hits in 34.1 innings pitched, while striking out six and walking five.

LeBlanc will have his hands full against a dangerous Richmond lineup led by Atlantic 10 home runs leader Matt Dacey. Dacey has five home runs and 18 RBIs on the season. Meanwhile, Doug Kraeger is hitting .306 with eight doubles and 15 RBIs on the season. Tyler Beckwith has given the Spiders a boost at the top of the lineup with a .328 average and a .400 on-base percentage.

“They have dangerous hitters throughout their lineup, guys who can really hit the ball a long way,” Stone said.

The Spiders lead the A-10 in home runs with 13. Seven Richmond players have connected for a home run on the season. They have averaged 5.24 runs per contest in their first 21 games of the season.

John Jennings has been a force at the top of the order for the Minutemen, posting a .333 average, a .485 slugging percentage and five doubles. He was 3-for-8 over the weekend against La Salle, scoring twice and hitting his team leading fifth double.

Freshman Mike Geannelis has lent a helping hand for the UMass lineup, posting a .378 on-base percentage while hitting for a .324 average. Kellen Pagel’s first career home run, a three run shot, on Saturday lifted the Minutemen to an 8-6 victory.

First pitch is scheduled for 3 p.m. on Friday at Pitt Field.

Tyler Fiedler can be reached at [email protected]