UMass basketball falls to Dayton on the road 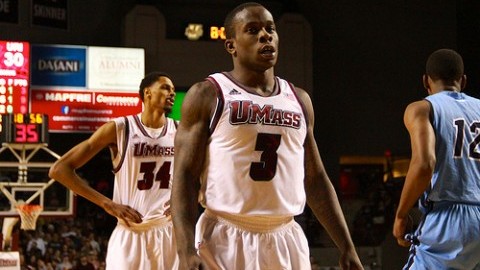 All of the little things that the Massachusetts men’s basketball did so well Wednesday night in its win over Rhode Island was ultimately the deciding factor in Saturday’s 86-79 loss at Dayton.

UMass was outrebounded, beat to the majority of loose balls and couldn’t convert on key free throws late in the game, dropping it from third to fourth in the tightly packed Atlantic 10 standings.

“It really comes down to two things,” UMass coach Derek Kellogg said in a postgame radio interview. “One was rebounding. We didn’t outrebound them like we were supposed to, and the second thing is the 50-50 balls. Every time there was one that they came up with, it led to a basket.”

Oh, and then there was fast start to the second half by the Flyers, who went on a 9-0 run in the first two minutes of the half to turn a one-point halftime deficit into an eight-point lead, catching the Minutemen (22-6, 9-5 A-10) so off-guard that before they knew it, the game was slowly slipping away from them.

“The first 30 seconds, I would say,” Kellogg said of the game’s turning point. “They went on a (9-0) run on two pretty basic plays as they got open 3s, and we turned the ball over on our end.”

UMass never overcame the opening surge, trailing by as many as 12 points with five minutes, 38 seconds left in the game.

But, in typical Minutemen fashion, they never gave up. UMass kept charging back, doing its best to respond to any Dayton (20-9, 8-6 A-10) basket with one of its own.

The Minutemen cut the Flyers’ lead to only three points with just under a minute left when Chaz Williams made a layup that brought the score to 80-77. But Dayton ended any UMass hopes of a comeback, knocking down six of eight free throws down the stretch to end the game on a 6-2 run.

“When you’re down 11 with however much time left and you do a good job of cutting it to (three points), you have to be very lucky to come away with the win,” Kellogg said.

After a nip and tuck first 20 minutes, the Minutemen walked off the court and into the locker room with a 37-36 lead. With the offense well in rhythm, Kellogg told his team following the game that in order for this UMass team to be successful come postseason, it is going to need to be stronger on the defensive end.

“It’s what we talked about after the game,” he said. “Our offense feeds off our defense, whether it’s the press or the half court. Honestly, when teams are scoring the way they did today, we can’t our transition game going.”

The explosive offense that doomed the Minutemen came mostly from the sharp shooting of Jordan Sibert. Sibert scored a game-high 23 points, going 4-for-7 on 3-pointers. He was one of five Dayton players to hit double figures in the contest.

Trey Davis led all Minutemen with 19 points off the bench, while Williams finished with 17 and Derrick Gordon chipped in with 15. They were the only three players to score at in double figures for UMass.