UMass basketball seniors have one more shot at bringing back hardware 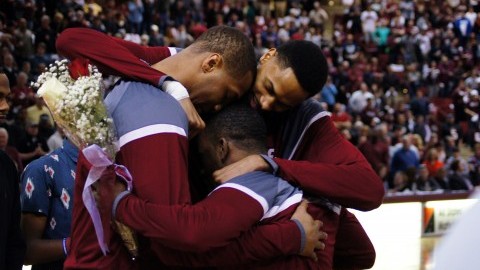 The trophy served as a reminder to the Massachusetts men’s basketball team. The Minutemen rattled off three wins in four days to capture the Charleston Classic in November, finally earning an opportunity to add to the team’s trophy case.

But the sole piece of hardware also serves as another type of reminder to UMass; it sits alone.

“He looks lonely,” Minutemen coach Derek Kellogg said. “We need to get him some buddies, some more trophies.”

That sentiment resounds profoundly for UMass forward Sampson Carter, who embarks on his last attempt at an Atlantic 10 Championship trophy on Thursday when the Minutemen face Rhode Island at 9 p.m. at Barclays Center in Brooklyn, N.Y. UMass hasn’t won a conference championship since 1996.

Carter, a fifth-year senior, is an integral part of Kellogg’s rotation and is one-third of a senior class that includes Chaz Williams and Raphiael Putney. The window of opportunity to chase trophies is nearly shut for a trio that’s played a crucial role in rebuilding the basketball program under Kellogg.

“We look at (the trophy) and we see it’s alone over there,” Carter said. “Now, we’re back to the championship mindset and back to tournament play. I feel we’re a good team in this type of situation.”

For Carter, it’s been a winding, ambiguous path to that championship mindset. His freshman year, the Minutemen went 12-20. His junior year, he suffered a season-ending hip injury after just seven games. There were nights, especially early in his career, where the team played in front of less than 2,000 fans.

A self-proclaimed winner at every level, Carter admitted the strain from the combination of losing and adversity was difficult.

“It took a lot, man. Dealing with our own ego’s too, coming from high school I was a winner,” Carter added. “I was a winner in AAU. I was just a winner, period. My first two years coming here and losing, it was a shock and an experience.”

Part of Kellogg’s sales pitch to both Carter and Putney was that of a vision. If the Minutemen could infuse the Amherst area with consistent production and excitement, the community would respond. And with the help of a foundational recruiting class, UMass could create a consistent winner.

“I didn’t realize it would take so long or how hard it was,” Carter said. “But (Kellogg) definitely had to paint a picture for us to see and it definitely sounded good and looked good. It was definitely hard getting to this point, but I don’t regret anything.”

If the program was Kellogg’s canvas, Carter and Putney were among his initial brush strokes. The addition of Williams via transfer from Hofstra molded a clearer picture. Additional pieces added depth to the roster. UMass crossed the 20-win threshold in 2011, amassing 25 wins. It did it again the following year, winning 21 games.

With the talent and consistency in place, the Minutemen could chase the final part of that vision; championships.

“One of the goals was to win championships,” Kellogg said. “Win an A-10 Championship and to get to the NCAA Tournament and make a run at a championship there.”

Putney, who’s averaging 9.5 points per game in his final season, acknowledged that this is his final opportunity to come through on that goal.

“We had a team meeting yesterday, players only, and we all came together and said ‘give it everything we got,’” Putney said. “This is the last go around for me, Sampson and Chaz so we just need to come together as a team and do what we need to do and we should get this championship.”

The senior class’ importance to the rebuilding project can’t be understated, nor was it ignored. The Mullins Center sold out on Senior Day against Saint Louis and all three players received loud ovations prior to the game. It was a total juxtaposition to the type of support the program received years ago, when there was little more than a vision.

Now, the combination of Carter, Putney and Williams has one more crack at adding to the Mullins Center trophy collection.

“I do understand we’re leaving behind a legacy,” Carter said.

“These last five years, it was rough,” he added. “And before we got here, it was really rough. To see where we’ve come now, with three consecutive seasons winning 20-plus games and to be a part of that, it’s a beautiful thing.”