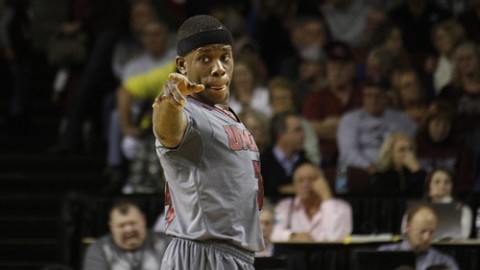 RALEIGH, N.C. — The Massachusetts men’s basketball team finally knows who its second round opponent will be in the NCAA Tournament: Tennessee.

After getting selected as the No. 6 seed in the Midwest Region, UMass had to wait an extra three days to find out who its first Tournament opponent in 16 years would be, waiting on the winner of the No. 11 play-in game between the Volunteers and Iowa.

It posed a tough scenario for the Minutemen, as they had to game plan for two teams rather than focusing solely on one opponent for almost a week. But now that its opponent is set in stone, UMass can now fully turn its attention to Tennessee.

“It was kind of a good week and also a trying week because we were able to spend some time on UMass,” UMass coach Derek Kellogg said. “But at some point, you wanted to know if we are playing Iowa or Tennessee. To finally realize who we’re playing and what they bring to the table is somewhat, at least, a relief in that you know what to prepare for and what we’re trying to do.”

One major part of the game plan for the Minutemen will be establishing a presence on the glass. The Volunteers have four players that measure at 6-foot-8 and taller, and used that size to overcome an 11-point deficit in regulation and outscore Iowa 14-1 in overtime.

Tennessee’s ability to attack the glass makes it essential for junior Cady Lalanne and the other notable big men for UMass — Raphiael Putney, Sampson Carter, Maxie Esho and Tyler Bergantino — to establish an inside presence right away.

“Everything has to start earlier, pushing them off the paint early, make sure they don’t have good post position,” Lalanne said. “As soon as a shot goes up, turn around and box them out. Both (Tennessee big men Jarnell Stokes and Jeronne Maymon) average a pretty good amount of offensive rebounds and that’s how the team gets going too.”

“So me and (Carter) and (Esho), whoever is down there, just make sure we turn around and box them out and keep them out of the paint.”

One part of the Minutemen’s game that could create problems for the Volunteers is their speed. UMass is a team that likes to get out and run, generating its best scoring chances on the fast break. Tennessee, on the other hand, prides itself on strong defense, something that could be exposed should the Minutemen get out in transition.

“We know that they like to push the ball, so we know going into the game that we need each person to get back,” Tennessee senior Jordan McRae said.

The one positive that the Volunteers can take out of the win against Iowa despite the quick turnaround is the comparable style of play to UMass.

“Both (Iowa and UMass) are very similar,” Tennessee coach Cuonzo Martin said. “They both have length and size and get out and press a little bit.”

With the way that the Minutemen like to play, it’s essential for them to get off to a fast start. UMass has become accustomed to falling behind early in recent games, which proved to be problematic in the Atlantic 10 Tournament.

If that’s the case on Friday, the moment and pressure may wind up being too much to overcome.

But despite the heightened atmosphere and media attention surrounding Friday’s game, senior Chaz Williams knows that even though it’s an experience that should be appreciated, there’s still a job to do.

“(The atmosphere) gives you the kind of feel like it’s a Super Bowl, it’s a World Series game,” he said. “So it’s just pretty exciting just to know that we’re here for a purpose and we have business to take care of.”