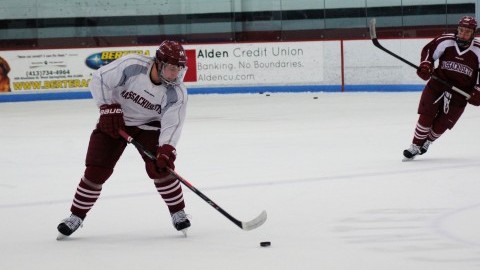 It’s game day. Frank Vatrano steps on the Mullins Center ice. He has his skates on his feet, stick in hand and the Massachusetts sweater over his torso.

He starts warming up. He skates, handles the puck and shoots, honing the skills he’s been developing since he was out in his parents’ driveway at about 3 years old.

Here, he can imagine the game situation; who’s in goal, where the defenseman is and what his options are. He’s ready to play.

But when the lights go on and fans start filing in, Vatrano is no longer there. Instead, he’s like everyone else – watching. Win or lose, all he can do is watch.

This was the story of Vatrano’s 2013-14 regular season. He enrolled at UMass in January 2013, but was ineligible for the regular season due to NCAA transfer rules after a bitter end to his short career at Boston College.

He’s practiced with the Minutemen for the last year and a half, but with no reward. Those practices have been his games. With each exciting win, or devastating loss, Vatrano felt useless as he served his time sidelined by the NCAA.

“With me not playing, there’s a sense in my mind that I can’t help the team, there’s nothing I could do,” Vatrano said. “When you’re watching a home game and there’s 8,000 people there, you’re just like, ‘Wow, I really want to be on this ice right now. I wanna help the team, help them win.’”

The redshirt freshman will finally have a chance to help UMass when he’s eligible to make his collegiate debut in Friday night’s opening round of the Hockey East Tournament at Gutterson Fieldhouse against Vermont.

Vatrano hasn’t played a non-exhibition hockey game in nearly two years. It’s been a challenge for someone who’s grown up with and around hockey his entire life. But as he practices this week, he will finally begin the next chapter in a hockey story that began in diapers.

It was difficult to avoid hockey growing up in the Vatrano family. Of the four boys – Sammy, Greg, Mike and Frank – three went on to play in college.

Sammy played at Babson College and Greg played at American International. Then there was Frank, who, as the youngest, fell victim to the playful abuse that siblings are often subject to.

That started when Frank was two and a half years old. His brothers, cousin Barry Almeida and family friend T.J. Syner needed someone to play goaltender in the driveway of their Springfield-area home. Frank was always the logical choice for that role.

He would come outside in his diaper, throw on pads, lace on one of his brothers’ roller blades, which were twice his size, and face shot after shot from a group of future college hockey players.

He could barely walk or talk, but withstood every beating that came his way.

“It didn’t matter,” said Almeida, who won national championships at Boston College in 2010 and 2012. “As long as he was playing hockey he didn’t care where he was playing with the big guys.”

That driveway activity quickly became a passion for all involved. But it was Vatrano that may have benefitted the most. After facing so many pucks as a toddler, he developed a lethal shot of his own. One that is still envied by those around him.

“Me and T.J. Syner are really close, and we always imagine, ‘Man, if we only had Frank’s shot,’” Almeida said.

“He always scored goals as a kid,” Syner said. “He was a smaller kid and somehow he’d score three or four goals a game.”

Vatrano quickly worked his way through the ranks growing up. He played for the Eastern Junior Hockey League’s Boston Junior Eagles at just 13 years old, and spent two seasons with the U.S. National Development Team, winning gold at the 2011 IIHF World U-18 Championship in Brno and Znojmo, Czech Republic. He registered 35 points on 16 goals and 19 assists in 60 games with the U.S. in 2011-12.

For college, Vatrano gave both BC and UMass strong consideration. But after seeing his cousin Almeida win a pair of championships and the incomparable tradition, playing for coach Jerry York and the Eagles was the clear choice.

Vatrano never forgot about UMass, however. It was close to home, he had Syner marketing the school to him and he always enjoyed the Mullins Center environment on game nights.

“The atmosphere here, seeing those games, I was like, ‘Wow, this would be a great place to play. God forbid anything happens at Boston College this would be my first choice on the list,’” Vatrano said.

Little did he know what was about to come.

Vatrano set foot in Chestnut Hill in the fall of 2012 with high expectations. He was a valuable aspect of the Eagles’ recruiting class and was expected to make an immediate impact as a freshman on the defending national champions.

However, just mere weeks before the season began, Vatrano was informed that he failed the NCAA Clearinghouse, making him academically ineligible to play for BC.

The NCAA Clearinghouse is an organization that processes academic qualifications for Division I and II athletes in order to determine whether or not a student-athlete is eligible to play college sports. One step to that is reviewing a student-athlete’s academic record, such as SAT and ACT scores.

According to Vatrano, he failed the procedure because he didn’t submit the right test scores, something he wasn’t informed of upon being admitted to BC. He immediately withdrew from the school.

“It was a tough process to go through,” Vatrano said. He later added that leaving BC was “something I wanted to get done right away.”

Almeida was in Boston when he found out what happened, and picked up Vatrano at BC. He offered some words of encouragement.

“Frank, you know what, it didn’t work out, there’s no reason to stay down like this,” Almeida told him. “It just wasn’t meant to be. Just find out what you want to do next and just work hard.

Vatrano’s next call went to Kevin Czepiel, who was a senior captain at UMass at the time. The two knew each other well and Vatrano expressed his interest in joining the program. Czepiel relayed the message to UMass coach John Micheletto, who was instantly excited to hear of Vatrano’s interest.

“I was expecting to line up against him in a couple of months, more so than getting a phone call that he was interested in pursuing things at UMass,” Micheletto said.

At this time, Vatrano had rejoined the Junior Bruins. It was a significant downgrade in competition for him, as he was used to playing against the top players in the world with the U.S. Under-18 team.

There was one practice that stood out to him, however, and it included a visit from Micheletto, who talked to him about making a separate visit to UMass. Weeks later, he made his official visit with his father, Greg. After checking out the campus and talking with Micheletto, it became clear to both sides that UMass was the right fit for Vatrano, so he committed that day.

All he could do next was wait for his opportunity to play.

Vatrano joined UMass in January 2013, but all he could do was practice due to NCAA transfer rules. Each week was the same: practice every day, but no game to look forward to that weekend.

Then came the 2013-14 season. In September it was announced that he would be ineligible until the 2014 Hockey East Tournament. For Vatrano, that meant another regular season of nothing but practicing.

It was a frustrating five months for Vatrano. The weeks of hard work took its toll emotionally. He often struggled to control his emotions and developed a short fuse. He felt helpless.

“With me not playing, there’s a sense in my mind that I can’t help the team, there’s nothing I could do,” he said. “If you make a mistake in practice you’re like, ‘What am I gonna do? I’m not gonna be able to play.’

“I wouldn’t consider myself an angry person. Just with everything I’ve gone through, I think things get to me a little easier.”

But Vatrano made the best of his situation, and tried to be a good teammate. He went to all of the home games and followed the road games back in Amherst. Afterward, he’d offer his teammates input on each game, participated in film sessions and pointed out areas he felt they needed to improve, earning him the respect of his coaches and teammates.

Micheletto has been especially impressed with Vatrano’s progress. He said that there are often multiple instances in a season when a player who has transferred or is ineligible for some reason loses their focus and energy.

That hasn’t been the case for Vatrano.

“To tell you how he was mentally coming into this thing and how focused he’s stayed throughout is really the most impressive thing to me,” Micheletto said. “He’s continued to push his game even though he hasn’t been able to play in actual competition.”

Vatrano took an unfortunate situation and turned it into a maturing experience. And whenever he felt troubled, he turned to his family for support.

“He’s one of those kids. He’s just a great kid. He works hard even if he is frustrated,” Almeida said. “I’m sure he was frustrated. Anyone would be while not being able to play. But he won’t show it. He’s a good kid to be around.”

Vatrano was finally rewarded on Jan. 12 when he played in the Minutemen’s exhibition contest against the U.S. Under-18 team. He scored a goal and assist, and gave UMass fans a brief look into the future.

“It was a good feeling,” he said after the game. “I’m not used to scoring goals; it’s been a long time.”

The time has flown by for Vatrano since the exhibition. The days have been shorter, and the excitement and anticipation for his first collegiate game has been building.

When he steps on the ice Friday night, it’ll be the culmination of the challenges and emotional swings of the past year and a half. His name will finally be on the line chart. He can finally play.

“I’ve been practicing for the last year and a half, and I’m looking forward to getting away from that, finally,” Vatrano said. “I look forward to play in games now.”

As for what to expect from him?

“He wants to score, he loves scoring,” Syner said. “It doesn’t make him a selfish player, it makes him fun to watch, so I think he’ll be good for the program.”

His debut is one that has not only been highly anticipated by Vatrano himself, but also by the fans holding out hope that this 8-21-4 UMass team can make a run in the Hockey East Tournament.

While he may ultimately not be the difference in how far the Minutemen go this season, if he finds an opening with the puck on his stick, expect something extraordinary to happen.

“If he has that puck in the slot, I don’t care if Jon Quick is in net, it’s gonna go in,” Almeida said.

“I think he’s gonna get an opportunity to play a lot more,” he continued. “It’s all up to him. I have faith that he’ll be a special player.”