UMass Hillel to play in the National Hillel Basketball Tournament 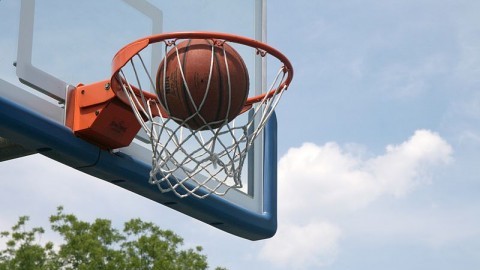 During the last weekend of March, eight students from the University of Massachusetts will travel to Maryland to play in the third annual intercollegiate National Hillel Basketball Tournament.

The tournament is an all-Jewish, non-profit basketball tournament comprised of 40 schools from across the country. This year, it will be held from March 28 until March 30 at the University of Maryland. UMass has competed in the tournament every year since it was founded in 2011.

With the University of California Los Angeles participating this year, the tournament will include a west coast school for the first time ever. Yale, Harvard and UCLA are among the 32 male teams playing, while eight women’s teams from schools in Boston, Columbia University and more will be participating in the tournament as well.

“This is the most schools the tournament has ever had,” Goldberg said. “(It) is a tradition where all these schools around the country come to Maryland, West Coast included… every year it has grown.”

Each school can register a team of five to eight undergraduate students for a fee of $1,000, which includes food, gym reservations, apparel and other tournament costs, according to the tournament’s website. Students are also invited to attend as fans. This year, it is being put together by volunteers mainly from the University of Maryland, as well as sponsors.

“We haven’t had any fans come in the past years but it would be great to see some UMass students come down and support our team. For the future, they could definitely drive down with other friends for the weekend,” said Corey Dicker, a junior at the University and UMass Hillel team member.

The tournament begins with all participating members, including players, volunteers and other team members, sitting down for a Shabbat dinner on Friday night, which has included over 500 people in the past. The games begin the following day with a separate women’s and men’s tournament. Each team competes for the trophy, known as the “Kiddush Cup.”

The weekend games are seen as a great way to build camaraderie between Jewish college students, as well as just to have fun, according to Goldberg.

“I feel that it gets our name out a lot more throughout the entire college Jewish community, which is definitely amazing,” Dicker said. “The tournament is an excellent experience and a huge opportunity to meet hundreds of other (Jewish) college students from different Hillels across the country.”

The tournament is funded by anonymous donors or sponsors, as well as the registration fees. Although the tournament is relatively new, it has attracted various sponsors, including Under Armour, which is supplying jerseys for the teams, and Ben Yehuda, which will supply food, such as pizza. Other sponsors include Gatorade, Muscle Milk and Bobble Water. The Shabbat dinner is sponsored by the Jewish fraternity Alpha Epsilon Pi.

“I am really excited to play in the tournament. Our team had an awesome time and weekend at the University of Maryland last year, and we are very much looking forward to going back again this year,” Dicker said.