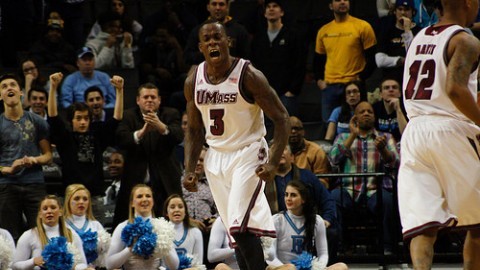 NEW YORK – Basketball teams aren’t supposed to win games when they shoot 17-of-54 from the floor.

The proposition of victory becomes even tougher when the opponent shoots 61 percent in the first half, 46 percent for the game and leads by as much as 11 points in the second half.

And the Massachusetts men’s basketball team isn’t supposed to win when guard Chaz Williams shoots 3-of-12 from the floor and has the same number of assists (three) as turnovers. But the Brooklyn, N.Y., native, who prides himself on succeeding in situations in which he’s perceived to be counted out, yet again did the unexpected on Thursday night.

With just one minute, 52 seconds remaining and the outcome up for grabs, Williams took a hard dribble to his right at the top of the key. But instead of continuing his drive, he abruptly stopped, stepped back beyond the 3-point line and launched a high-arching shot. Unlike his first five 3-point attempts, this one finally found the bottom of the net and gave the Minutemen a 61-56 lead.

It was the defining moment of UMass’ 65-61 victory over Rhode Island in the first round of the Atlantic 10 Tournament at the Barclays Center, and it came from a player that’s defined a career with shots of similar nature.

“I basically knew it was in,” Minutemen coach Derek Kellogg said. “I’ve seen that numerous times in his career and that was one more for the memory bank.”

The Minutemen advance to the tournament quarterfinals against George Washington at 9 p.m. Friday night with Thursday’s win.

Williams’ 3-pointer punctuated a lengthy second half UMass comeback, bringing a decidedly pro-Minutemen crowd to its feet and invoking visible emotion from Williams, who appeared frustrated for most of the game. He finished with 11 points.

“I was just playing with confidence down the stretch,” he said. “I felt like I hadn’t done enough this game to help my team and I didn’t want to let these guys down. So I felt like I had to make a stand somewhere.”

UMass spent the final 10 minutes of the second half making a stand, desperately trying to undo the deficit it created in the first half. The Minutemen allowed the Rams to score just once from the field over the final 9:50. They slashed a nine-point deficit down to just a single point, before finally taking a 56-55 lead on a Trey Davis layup with just over three minutes remaining.

It was a polar opposite to UMass’ first-half performance.

Rhode Island went into halftime leading 37-29 behind strong shooting from guard Xavier Munford. He finished with 24 points, 18 of which came in the first 20 minutes. The Minutemen looked frustrated and out-of-sync on both ends of the ball.

“At halftime I asked (the team), ‘How can a team shoot 60 percent? This is crazy. This is not our identity, this is not who we are. So if you guys would like to try and continue to play, you’ll go out there and take it to them. If you’d like to go home, you’d go out and do what you did in the first half,’” Kellogg said.

One of the players who immediately heeded Kellogg’s warning was reserve forward Maxie Esho. The 6-foot-7 junior led UMass in scoring with 15 points off the bench, while chipping in seven rebounds. Esho provided defensive energy and two thunderous dunks early in the second half to jumpstart the Minutemen.

“He was the one that kept us going in the first half and early in the second half,” Williams said. “With his energy and the way he came out to play, guys just didn’t want to let him be the only one out there doing it.”

UMass slowly chipped away at the lead. Derrick Gordon cut the deficit to six points with 9:39 remaining. Davis then cut the lead to 55-51 with another layup. Neither team scored for over four minutes down the stretch, until a Raphiael Putney fastbreak layup made it 55-54. With the crowd behind them, the stage was officially set for Williams.

The Minutemen also benefited from strong free-throw shooting. They went 28-for-36 from the line, dwarfing the Rams’ 11-of-23 shooting performance. Gordon, who finished with 10 points, went 6-of-7 at the free throw line.

Now UMass shifts its focus to what Kellogg expects to be a difficult challenge.

“They have a really good squad and I do like their personnel,” Kellogg said. “They’re an NCAA Tournament team that’s improved as the year’s gone on.”