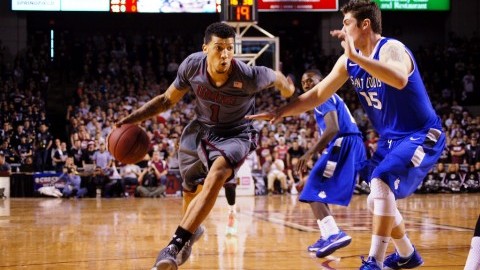 There’s a reason why so much emphasis is put on finishing in the top four of the Atlantic 10.

An easier path to the championship game is certainly one reason, but more important is the automatic bye that comes with it, eliminating the need to win four games in four days.

The Massachusetts men’s basketball team won’t have that fortune this weekend, as it slipped up on the final day of the regular season against Saint Louis, which caused it to slide to the No. 6 seed in the Atlantic 10 Tournament.

UMass already has experience playing numerous games in a short span of time. It had to win three games in four days to win the Charleston Classic back in November. Now, it must channel that same mentality in order to tackle this much taller task, especially if it wants to win its first A-10 title in 16 years.

“This is probably a little more daunting,” UMass coach Derek Kellogg said. “But the biggest thing I look for is, have you won four games in a row throughout the season because if you haven’t, then the chances of doing it now are probably not great.”

The Minutemen have won four games in a row this season multiple times.

In order to prevail on Thursday against Rhode Island in the opening round, mental toughness will be the key, according to senior Sampson Carter.

“At this point it’s just mental toughness,” he said. “We’ve been here before. We’ve played in a tournament three years in a row and the Charleston Classic proved that we can do it.”

Should UMass get by the Rams on Thursday night, then the second part of the test kicks in, as it will only have roughly 20 hours to regroup and prepare for No. 3 seed George Washington on Friday.

“It is (a quick turnaround), but they don’t know who they’re playing either,” Kellogg said. “At this point, we all know what we’re doing and how we’re playing. I don’t think anybody’s changed too, too much in the last week or month really.

“Now it’s who can do what they do best for four straight days, or for the fortunate teams, three straight days.”

Added to the task of potentially playing four straight games is the familiarity that every team within the A-10 has with each other.

“Teams know how we play individually,” Raphiael Putney said. “We’ve been playing for four years against these guys, so it’s a lot harder than what you think it is in Charleston.”

To serve as a friendly reminder that his team can win multiple games in a short span, Kellogg has had the Charleston Classic trophy sitting courtside at practice this week.

“I want them to see that we’ve won a championship this year and we’re going for another,” he said. “That we’re capable of winning three or four games in a row and we’ve done that on a neutral floor.”