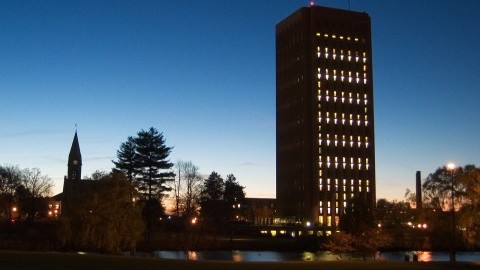 With the end of the semester and school year approaching, graduating seniors at the University of Massachusetts are looking to make the most of their time in the next nine weeks before graduation.

Some seniors have developed personal “graduation bucket lists” full of things they want to accomplish before leaving UMass. They are looking back, reflecting on their college experiences and looking forward to their futures.

Emily Messing, an operations and information management major from Townsend, said that she wants to try to eat at every restaurant on North Pleasant Street, and also try every kind of pizza offered at Antonio’s Pizza.

In addition, Messing said that she has started hiking mountains on the weekends.

“That’s one of the cool parts about living here, there’s a lot of cool places to go hiking,” Messing said. “I’m trying to just take everything in before I have to leave.”

Messing is currently applying for jobs within her field. She explained that her ideal job would involve working for a large manufacturing company, where her position would entail ordering the parts, keeping track of transportation for the parts as well as the finished products and charting demand for that product.

Some of the companies that she has applied to include the Pratt & Whitney aerospace company and the toy company Hasbro.

Messing said that, if possible, she’d like to continue living in Western Massachusetts. She added that she has mixed feelings about graduating.

She advises underclassmen to take advantage of every opportunity that comes along.

“Enjoy every minute … Go to every party you’re invited to and go to every sporting event you can. … Talk to everyone. Join a club you would never think of joining,” she said.
Messing added, “Maximize your time here because when it’s over, you’re not going to have another chance.”

“Do whatever you can on campus; involve yourself in everything,” Eng said. “It’ll be great for senior year when you have to write your resume and you’re sitting there going, ‘What did I do in the last four years?’”

“UMass is great (when it comes to clubs and other activities). It’s such a big campus—you honestly have endless possibilities in what you want to do,” she continued.

Though Eng doesn’t have a “graduation bucket list” for the next nine weeks, she said that she just wants to have fun and enjoy the rest of the semester. After graduating, she intends to move back to New York to attend the Animal Behavior College in hopes of becoming a dog trainer.

Eng explained that the one-year program at ABC will involve six months studying at home followed by six months shadowing a trainer and getting hands-on experience.

After students have completed the program, ABC sometimes places them into jobs. Eng said that she is willing to move anywhere to get a job in the field, but she’d especially like to live somewhere on the west coast.

John-Mark Unsworth, a psychology major from Hamilton, feels similar to Messing in regards to graduating. He said that he isn’t nervous, but rather, “excited, with a little bit of apprehension.”

“I feel like it’s a transition state, so there’s … new experiences to be had, new opportunities to have,” Unsworth said.

Before graduating, Unsworth would like to go zip-lining over the Berkshire Mountains.

“I learned about that, like, a year and a half ago, and I was like, ‘You know what, I really want to do that!’” he exclaimed, snapping his fingers.

After graduating, Unsworth plans to spend the fall studying for the Medical College Admission Test, which he hopes to take before next summer so that he can apply to medical school. Although he is unsure what school he will attend, he aspires to be a surgeon.

Unsworth said that he has “boatloads” of suggestions for college students.