UMass students give opinions on The Hatch eatery 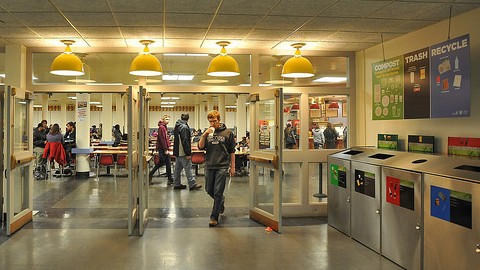 Which cafe is better: The Hatch or Blue Wall? This used to be an ongoing debate at the University of Massachusetts, but now students no longer have the choice. With Blue Wall and Burgers 101 closed for the construction of a new eatery in the Campus Center, The Hatch has taken on a larger crowd of diners, who have mixed feelings about the change.

The Hatch, located in the Student Union, serves breakfast in the morning and also offers a variety of lunch and dinner options that include Star Ginger Asian Grill, Pita Pit, UMac and Cheese and Cafe Spice Indian Cuisine.

Starting at the beginning of this semester, The Hatch has expanded its hours, remaining open from 8 a.m. until 11 p.m. Monday through Friday and 8 a.m. to 9 p.m. Saturdays and Sundays in an attempt to accommodate for the additional students. Regardless, the lunch and dinner rushes each day still result in long lines and crowded tables, according to many students who frequently dine at the cafe.

“During busy hours, it’s absolutely packed,” Kenta Kawasaki said as he ate his lunch from Chicken and Co.. “When there’s so many people in here, it gets really hot too.”

Kawasaki added that The Hatch’s attempt to combat the heat was ineffective, gesturing to the fans on the ceiling that he found to be more annoying than helpful.

“All they do is blow our napkins around,” he said.

Erica Fitzpatrick, a senior who was dining with Kawasaki, nodded as he spoke about the heat. “I’m not trying to sweat while I eat my food,” she said.

The two agreed that they miss Blue Wall for its spaciousness and larger variety of food choices, but added that they still enjoy many of the options that are offered at The Hatch.

“It really isn’t that bad,” Fitzpatrick said. “There are certain things that were better at Blue Wall, like the wraps, but you can still find good food here.”

“To be honest, I ate here a lot even when Blue Wall wasn’t under construction,” Kawasaki said with a laugh. “I think it’s just that now that it’s gone, I want the things that you can’t get here.”

For Konstantin Gorelik, those things include beverages such as Vanilla Coke and different flavors of Powerade.

“You’re deprived if you never ate at Blue Wall,” he said. “The chicken was better there and just the whole area was nicer.”

Despite some agreement with these opinions, Daniel Peters has been dining at The Hatch nearly every day this semester. “The food is decent,” he said. “It’s not as good as Blue Wall, but there’s still some good stuff. I loved Burgers 101 though, so I miss that.”

“Gelato. That’s what is gone from my life now,” sophomore Philip Rebrovic said in a mock-dramatic voice, referring to the Paciugo Gelato bar that was located on the far left side of the Blue Wall dining area. “Chicken Co. and UMass Mac and Cheese are awesome though, so I don’t have much of a problem with the renovation.”

Sakshi Hingorani said that she loves coming to The Hatch for Indian cuisine from Café Spice or salads from Pita Pit. “I think the food here is great,” she said. “I guess because I’m a freshman, I don’t really know what I was missing though, because I only ate at Blue Wall once or twice before it closed.”

Hingorani added that she also tends to come to the cafe after her afternoon classes, when the peak hours for lunch time have passed and The Hatch is not as crowded.

The case is not the same for other students, such as Gorelik. “I don’t want to come here and sweat trying to get food between class,” he said. “But hey, at least UPub is still open.”