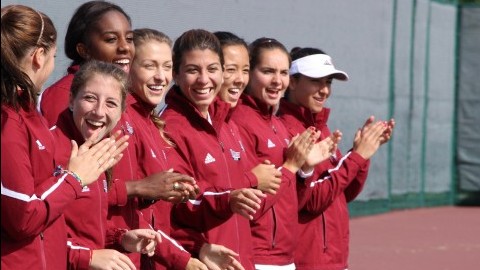 Coming off a weekend where they split their two conference matches against George Washington and Fordham, the Massachusetts women’s tennis team continued a grueling road trip against Columbia in New York on Saturday, March 8.

Before the match, UMass coach Judy Dixon knew it would be a tough contest, saying, “Columbia is going to be the hardest match we’ve played all year.” Her prediction proved to be somewhat accurate as the Minutewomen lost 5-2, however, not without a few bright spots.     Freshman Aarzoo Malik, a new recruit out of New Delhi, India, secured one of UMass’ two victories on the day in the No. 3 singles match. She defeated Columbia’s Vivian Cheng in straight sets 6-1, 6-2. Malik has the best win percentage on the team this season, boasting an impressive 7-2 record in dual matches.

Anna Woosley, another recruit from across the pond, provided the Minutewomen with their other victory just below Malik in No. 4 singles. Woosley, who hails from Sussex, England, defeated the Lions’ Tiana Takenaga also in straight sets, 6-4, 7-5. She is one of three athletes on the team, alongside Malik and Chanel Glasper, to have a winning record in dual matches this season (5-4).

Dixon had only praise for the pair of international freshmen.

“They’ve been outstanding” Dixon said. “It really bodes well for the future. I’m really impressed with their play in singles.”

Dixon, however, has not been impressed with her team’s doubles play and Saturday’s performance was a familiar scenario as the Minutewomen were swept in doubles once again, before dropping the No. 1 and 2 singles matchups. The victories in the No. 3 and 4 spots kept UMass in the match, but neither Arielle Griffin nor Jessica Podlofsky could secure a victory in the No. 5 or 6 spot, respectively, despite each match going the full three sets.

Podlofsky, who tied the UMass record for most career singles victories earlier this season in a match against Bryant, hasn’t secured the record outright since that match. Since her record-tying victory on Feb. 9, she is 0-5 in singles matches, with four of the losses coming in straight sets. The team has posted a 2-3 record in that time span.

Despite their recent struggles, Dixon remained optimistic after her team’s performance against a formidable Columbia squad, especially with the context that the Lions are ranked No. 43 in the nation.

“Sometimes we lose a match where we played our absolute best” she said. “I have a lot of hope for us as we head into the last half of our season. We have now a team that believes that they can play with the best teams in the country…I’m still trying to figure out our doubles combinations…but I think our singles line-up is pretty well-established.”

Podlofsky and the rest of the UMass tennis team will look to get back on track over Spring Break as it travels to Charleston, S.C. for a series of three matches. It will take on Georgia Southern on March 18, the College of Charleston the day after, and finally Tulane on March 21.