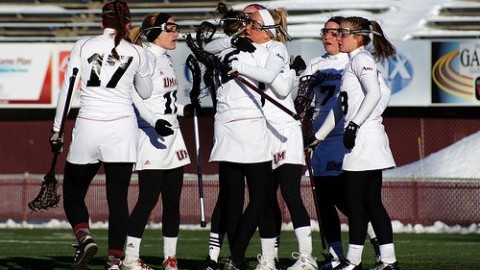 The No. 10 Massachusetts women’s lacrosse team will continue its long-standing New England rivalry with New Hampshire this Saturday when it hosts the Wildcats at McGuirk Stadium.

“UNH in general is always a great rivalry for us because we’re such similar schools with so much history in all our sports playing against each other,” UMass coach Angela McMahon said.

The Minutewomen (5-0) are coming off of their highest offensive output of the season when they defeated Iona 19-6 last Saturday. After a full week off, UMass now prepares for a Wildcats (1-3) team, which they have defeated in each of the past three seasons.

According to McMahon, a persistent and balanced contribution on offense has been key in the Minutewomen’s early success.

“Especially against Iona, our offense was our first line of defense,” she said. “They were able to work to get the ball back so we were able to continue to get more shots off.”

While seniors Katie Ferris (11 goals) and Sam Rush (14 goals) led UMass with 25 and 16 total points respectively, McMahon said that the emergence of underclassmen is the difference on offense.

“(Ferris and Rush) are always going to put up numbers, but it’s easy to shut two people down,” she said. “So we need to have those multiple threats in order for us to be successful.”

In particular, Ferris said that sophomore Erika Eipp has been “great” in filling this role as a new offensive weapon. Eipp has scored seven goals this season, all coming in the Minutewomen’s past two games.

Despite UMass’ success in scoring goals, one area where McMahon said the team must improve on is turnovers, which have been a point of emphasis all season.

Although the Minutewomen won the turnover battle 24-18 on Saturday, McMahon said that the team has not yet reached a level of consistency that is needed.

“There’s been spurts where we’ve done a good job, but then we have a 10 minute let-down towards the end of the game,” she said. “That area of the game needs to be done on a full 60 minute basis.

“No matter if you are winning or losing the game, (having the ball) is one of the most important things, so we can’t just give it away.”

Ferris agreed with McMahon that committing fewer turnovers will be a vital factor in the matchup against UNH, and added that staying patient will improve the team’s results.

“We definitely need to fix some mistakes from last game and just keep improving on being more patient and moving the ball,” Ferris said. “I’m definitely satisfied with what we’ve done, but I think we can be better.”

As for approaching the Wildcats, McMahon said that UNH is also well balanced, led by juniors Laura Puccia and Kayleigh Hinkle with nine points apiece.

“Because they have multiple threats, it’s hard to focus in on one particular player,” McMahon said. “So our whole defense is going to have to play well as a unit together in order to stop their offense.”

Saturday’s game is scheduled to start at 3 p.m..

When UMass looks across the sideline at the visiting UNH bench on Saturday, the team will be greeted with a trio of familiar faces in head coach Sarah Albrecht and assistant coaches Eileen Finn and Jesse O’Donnell.

Albrecht served as the associate head coach for the Minutewomen from 2011-12 and helped lead UMass to two Atlantic 10 championships. Finn was an assistant coach under Albrecht during these years and left for UNH with Albrecht.

O’Donnell also followed Albrecht after graduating from UMass in 2012. O’Donnell started for four years with the Minutewomen and was part of four A-10 championship teams.

“It’s exciting to welcome them back to campus and it’s always nice to see friendly faces on the sideline,” McMahon said. “They’re doing a very good job with their team in terms of implementing their system.”