A year of reflection 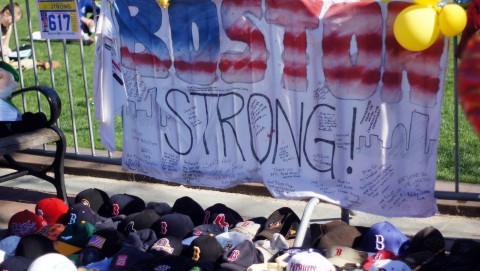 I remember it clearly. It was mid-January 2014, just a few months before the one-year anniversary of the tragedy that struck our city. My friend from the Midwest said, “The Boston Marathon? Yeah, wasn’t there a pair of twins who shot people?” Naturally, I was shocked and didn’t know how to respond.

How was it possible, with the presence of news organizations on social media sites such as Facebook and Twitter, to know so little about the biggest attack on United States soil since 9/11?

In my study abroad program this semester in Valencia, Spain, I’ve met people from all over the U.S., many of whom have little to no idea about the Boston Marathon or the attack that happened last spring. Maybe it’s because I major in journalism, because I’m from Boston, or maybe it’s both – but I can tell you every detail of the Boston Marathon attack and the events that followed in the days after.

When I quickly jumped on the opportunity to inform my friend, other people we were with from states such as Oklahoma, Nebraska and Michigan agreed that they had seen something about the attack on the news but that it didn’t affect them and they didn’t know much. One said, “Well, that kind of thing would never happen in Kansas.”

I wondered if she could understand that we always saw Boylston Street as a safe place, too. Sure, our parents told us to steer clear of Southie or Dorchester, but they told us that Boston was simply a safer city than New York. We never thought our home turf would be compromised by terrorism.

There are ways in which the attack has changed my life forever. In January, I was on the metro in Barcelona when a man in his mid-30’s walked into the same car as me and placed a black backpack on the ground. He bent over and was fiddling with his cell phone. Immediately, I was prepared to move as far away from him as I could. He walked away from his bag and I stood motionless as the worst thoughts went through my mind. He then pulled out a violin and began playing along to music coming from a speaker system inside his bag.

In the northeast, we’ve been cultured to be cautious of every suspicious package, out-of-place passenger and especially backpacks left unattended. Does this make us stronger or weaker? Or is it simply a test of human character about whether or not we can outgrow this fear, granted that such an attack never happens again?

During my semester abroad, every time I meet someone who asks me where I’m from, I don’t say Massachusetts, I say Boston, as it is an internationally recognized destination. It became clear I wasn’t the only one who did this during my internship last summer at WCVB-TV Channel 5. Susan Wornick, the now-retired news anchor who worked at the station on-air for 34 years, gave all of the interns a welcome speech where she asked how many of us were from Massachusetts, then asked us to keep our hands raised if, when people outside of the state or country ask where we’re from, we say Boston. Almost everyone kept his or her hands raised.

Boston is a small city, a tight-knit community and though we have always been proud of our Red Sox, a tragedy caused our pride to radiate. Some out-of-staters don’t understand why every event that happens in our city is now correlated with the saying, “Boston Strong.” It’s because in a small city like Boston, everything is connected. Our World Series victory and the following celebrations were simply the best ways we knew how to demonstrate the strength we had after such a tough year.

Like many people, I was supposed to be there, but a number of circumstances kept me on the South Shore. I was in the waiting room at the walk-in clinic at Patriot Place in Foxboro when a woman gasped, hand over mouth, whilst staring at her phone.

“There was an explosion in Boston,” she said. “At the finish line.”

Everyone in the waiting room immediately pulled out their cell phones to call friends and family – we all knew dozens of people there. Luckily, no one I know was injured, but the people of Boston will always be emotionally affected in some way, no matter where you were at the time of the attack.

Being away from home over the past few months, I am even more prideful about where I come from. We are lucky to be from a city that is so strong and able to overcome a tragedy like the one that happened last April. The only way to defeat hatred is to make something good out of something bad. I’m not a marathon runner, but I know a lot of people who trained this past year and will be completing the race in a couple of weeks, even though they may have never run more than six miles.

Maybe in some cities, people would stay at home, far away from the finish line with their doors locked. But I am certain that the people of Boston will face evil with a smile and a lot of sweat as they cross the finish line or cheer on those who do; and I wouldn’t have it any other way.