Animals cause trouble for Amherst Police 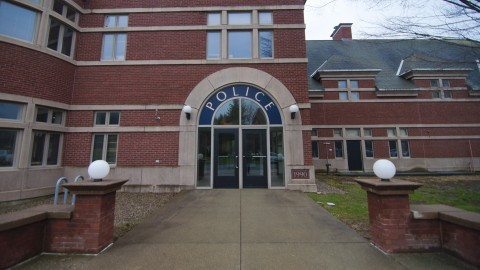 8:06 a.m.: Medical assistance was needed on Northampton Road for a cyclist who was on the ground bleeding from the head. The individual was going to sign an Amherst Fire Department refusal.

9:52 a.m.: Medical assistance was required on Main Street for a bicycle accident. No one was transported to the hospital.

11:24 a.m.: A suspicious male entered the Crocker Farm School on West Street. After his initial entrance, no one knew where he went or whether or not he was still in the building.

7:06 p.m.: A rabid opossum was on the porch of a house on South East Street. It was caught and released.

8:35 p.m.: Police assisted salamanders crossing Henry Street. They were causing traffic as they were walking out in front of vehicles.

11:01 p.m.: Omar Cruz of Amherst was arrested at the Subway on Main Street for possession of Class B drugs to distribute. This was a follow-up.

11:06 p.m.: A liquor law violation for an open container of alcohol occurred on Fearing Street.

12:09 a.m.: Jayson Wentworth, 23, was arrested on East Hadley Road for domestic assault and battery and assault with a dangerous weapon after a cup was thrown.

12:23 a.m.: Amelia Birenbaum of Pittsburgh, PA, Dominique Michaud of Danvers and Leigh Engle of Rye Brook, NY were arrested for unlawful noise after a party of 300 was cleared.

12:24 a.m.: Peace was restored after a fight between two males on Amity Street.

1:05 a.m.: Paul Zarrilli of Southborough was arrested for assault and battery and disorderly conduct at Kappa Kappa Gamma on Nutting Avenue. He was accosting females and eventually knocked one of them to the ground. He was resistant to arrest.

2:19 a.m.: There was a noise complaint at Alpine Commons on Belchertown Road. There were people screaming on the balcony, along with complaints of loud bass.

3:36 a.m.: Gaelyn Harvey, 22, of Amherst was arrested on Logtown Road for domestic assault and battery. There were no injuries reported.

4:21 a.m.: Medical assistance was needed on Heatherstone Road for a 24-year-old male with swollen tonsils and difficulty breathing. He was transported to Cooley Dickinson Hospital by the Amherst Fire Department.

5:37 a.m.: Medical assistance was needed for an involuntary commitment on Main Street.

10:27 a.m.: Police checked for a road hazard after three deer were seen in the area around Lincoln Avenue.

11:33 a.m.: A motor vehicle crash occurred on North Pleasant Street between a PVTA bus exiting its stop and an oncoming car. There were minor damages and information was exchanged.

8:06 p.m.: There was a disturbance at the Amherst Carriage Shops on North Pleasant Street. Apartment 39 appeared to have been broken into and a male was unconscious.

8:29 p.m.: Vandalism was reported at the Amherst Carriage Shops on North Pleasant Street. A window was smashed in from a previous altercation.

9:20 p.m.: Salamanders were crossing the road on Henry Street, which caused impeding traffic.

9:23 p.m.: Police were near Zanna on South Pleasant Street looking for an individual from an earlier altercation on a bus.

9:38 p.m.: Robert Auffinger of Amherst was arrested for trespassing after refusing to leave a female’s apartment.

9:42 p.m.: Assistance was needed for a female on Main Street for a possible “Net Rate” scam. She was advised by TD Bank to file a police report. There is only possible wire fraud right now and no official crime has been confirmed yet.

10:14 p.m.: There was a liquor law violation on Fearing Street and all parties willingly poured out their drinks as they walked.

11:28 p.m.: The Amherst Fire Department responded to a call for medical assistance near Antonio’s Pizza on North Pleasant Street for an individual who was struck by a car and reported pain in his left side. He had no injuries but was uncooperative.

1:49 a.m.: Hunter Caggian of Worcester was arrested for OUI liquor, negligent operation of a motor vehicle to endanger, failure to signal and speeding.

10:36 a.m.: Medical assistance was needed on Market Hill Road for a 30 year-old female who was having difficulty breathing.

1:59 p.m.: A woman reported a suspicious package from Edible Arrangements in front of her house. The package was from well-wishers and there were no problems.

5:58 p.m.: Medical assistance was needed on Snell Street for an 84 year-old male with chest pain. He was transported to Cooley Dickinson Hospital by the Amherst Fire Department.

8:42 p.m.: Yamil Rivera of Holyoke was arrested at Ann Whalen on Kellogg Avenue after being involved in a dispute. The charges were disorderly conduct, resisting arrest and assault and battery on a police officer. The police officer sustained no injuries.

1:05 a.m.: Medical assistance was needed at Ann Whalen on Kellogg Ave for a male in his 70s with difficulty breathing. He was transported to Cooley Dickinson Hospital by the Amherst Fire Department.

2:43 a.m.: Medical assistance was needed at Applewood on Spencer Drive for an elderly female with severe back pain and she was transported to Cooley Dickinson Hospital by the Amherst Fire Department.