Boston Marathon 2014: A day to remember 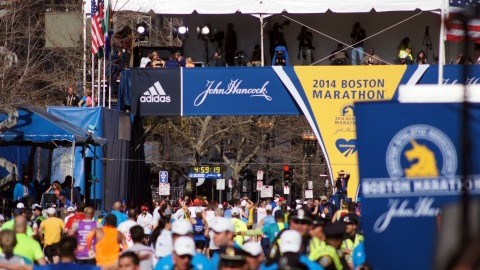 BOSTON – Nothing but eager anticipation and a strong sense of patriotism could be felt in Hopkinton during this year’s Boston Marathon.

By 7:30 a.m., thousands of people swarmed around the central green in Hopkinton. Vendors selling apparel sporting the words “Boston Strong,” “Taking back the finish line” and other patriotic phrases were spread intermittently across the crowds of people, anticipating the undoubtedly historical event that was about to take place.

According to the lead official for the Women’s Wheelchair division, 36,000 athletes were registered for the 2014 Boston Marathon. This is the largest turnout since the 100th anniversary, when nearly 39,000 runners entered.

In addition to such an enormous participant population, support from spectators at this year’s event was at an all-time high. It was estimated that more than 1 million people came out to watch the 26.2-mile race that spread from Hopkinton to Boston.

Among such large crowds were hundreds of first responders, security officials and police from last year’s Boston Marathon bombings. The Massachusetts State Police, military forces, Secret Service and a number of other federal agencies supervised the event.

“There are over 200 this year. And in Boston we have about the same amount,” said the policewoman. “A conservative estimate of 400 troopers. And we have patrols still. We have a lot of people working today. It’s a lot different, and there’s federal agencies, FBI, Border Control.”

In addition to the law enforcers supervising the event, a number of troopers participated in this year’s event, according to the policewoman.

The increased presence of security was clear among athletes and spectators alike.

“Last year, my husband could just walk right in to the Athlete’s Village with me, and we had a backpack,” said one runner about the differences in security.

Backpacks and large water bottles were two items on a list of objects the Boston Marathon Association requested athletes and spectators not to bring to the course this year. Spectators also passed through metal detectors and were given wristbands before entering the corrals and sidewalks parallel to the course.

Rich Hart, a volunteer for the Boston Marathon Association and the assistant coach of Stonehill College’s cross country and track and field teams, touched upon some of the major changes that took place regarding the security of the event.

“There’s more security, there’s more screening,” said Hart, who is currently the head official for the wheelchair division after 29 years of serving as a volunteer. “We had to submit our names and social security numbers and all that.”

That said, any one person in the crowd would agree that the 2014 Boston Marathon was anything but unsafe.

“People ask if we feel safe doing our job,” said one race official from the Massachusetts State Track Coaches Association. “And yes, I definitely do.”

Motivation was clearly instilled among the thousands of people attending Marathon Monday.

“We are unified by our compassion,” said a Hopkinton Board of Selectman prior to the start of the first wave of runners, the Women’s Elite division.

Runners in particular shared this mindset. “I’m very excited, all the nerves are out,” said one runner, who ran the event last year but was unable to finish due to the bombings. At the time of the incident, she was located just before the bridge outside of Kenmore Square. A Newton native, the runner happily noted her dedication and unveiling support for this event.

“I grew up in Newton, this is what we’re supposed to do,” she said.

She and 6,000 others were unable to finish last year’s Boston Marathon, but were invited to compete again this year.

Crossing the finish line first at the 2014 Boston Marathon was Meb Keflezighi, the first American male to win since 1983. Adding to the camaraderie and patriotism of the even was this tremendous success for American athletes.

Another top runner was Shalane Flanagan, a Marblehead native whose presence and success at this year’s event ignited pride among various fans.

The enormous pride, joy and strength exemplified at the 2014 Boston Marathon served as a historic representation of the nation’s empowerment over the tragedy that became of the 2013 Boston Marathon bombings.