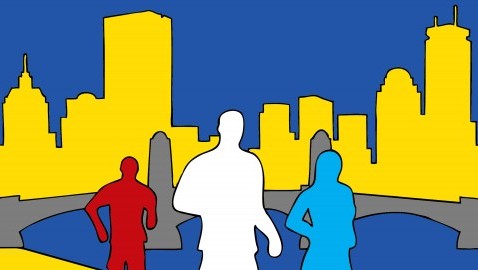 Today’s news and opinion sections are completely devoted to coverage of the one year anniversary of the Boston Marathon bombings. As the newspaper of the Commonwealth’s flagship university, we felt that it was necessary to mark this anniversary with content reflecting on how individuals, the city of Boston and the state of Massachusetts has recovered and coped with the tragedy over the past 12 months.

Over the past few weeks, Collegian columnists have been writing their opinions, reporters have been talking to spectators and runners from last year’s marathon, and the graphics team has been working tirelessly on visuals for the print edition and online. As always, the Collegian strives to provide content relevant to the campus community and we felt this anniversary was something that needed extensive coverage.

Runners reunited: looking back on last year’s Boston Marathon
By Kate Leddy
Runners at the 2013 Boston Marathon recall experiencing a finish that none of them had anticipated, and how they plan to remember and celebrate the strength of all of those who were at the scene.

One year later, spectators look to move on
By Catherine Ferris
Onlookers recall their experiences at last year’s Boston Marathon.

“Rucking” not allowed at Boston Marathon
By Justin Surgent
UMass ROTC unable to run marathon this year, due to “no bag” policy.

Bostonian spirit prevails
Katie McKenna describes her experience on the day of the Boston Marathon bombings and why the Marathon, and Boston’s pride, makes the city so unique.

A year of reflection
Samara Abramson reflects on her hometown pride and Boston’s enduring strength in the one year after the Boston Marathon bombings.