Boston seen as ‘changed’ since marathon 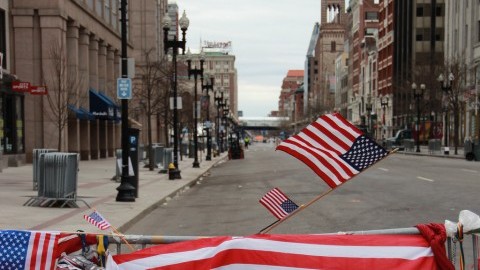 A majority of Massachusetts residents think the Boston Marathon bombings changed the city of Boston in a lasting way, according to a statewide survey conducted by the Western New England University Polling Institute.

Conducted via telephone during the first week of April, 73 percent of those surveyed felt that the bombings changed Boston while 24 percent said the city has not changed. Three percent said they did not know.

The survey did not ask for respondents to elaborate on their opinion, but many did, according to Tim Vercellotti, director of the Polling Institute and a professor of political science at Western New England University.

Vercellotti said that respondents who felt a positive change cited the surge in pride and unity in Boston that followed the attacks. People who felt negative change referred to the human suffering, both physical and emotional, that stemmed from the bombings and a lingering sense of insecurity throughout the city.

The survey also found that 53 percent of adults are very confident and 38 percent are somewhat confident that law enforcement agencies can keep this year’s marathon on April 21 safe.

The University of Massachusetts conducted a similar poll in conjunction with YouGov America with similar results. Only 6 percent of respondents in the UMass poll were not at all confident.

“Marathon officials are expecting a much larger crowd than last year, but despite that fact, Massachusetts citizens report that they are confident in plans for maintaining security at the event,” Brian Schaffner, director of the UMass Poll, said in a release. “It is notable that Massachusetts citizens are even more willing now than they were last year to support potentially intrusive screening of individuals at the Marathon. Clearly, security is an important issue as the Marathon approaches.”

“Even in a dyed-in-the-wool blue state, the actions of Tsarnaev last year continue to compel residents of the Commonwealth to overwhelmingly support the ultimate punishment for him should he be found guilty,” said Tatishe Nteta, associate director of the UMass Poll.