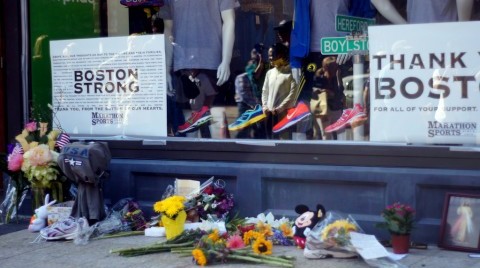 It is a strange feeling to see your hometown on a TV screen as you’re sitting in a hotel room halfway across the world, but that’s how it happened.

In the spring of 2013 I studied abroad in Galway, Ireland, where our classes ended on March 27.  After that we had a few weeks off as a “study period,” which, to me, meant travel time. I’d made it to London, Paris and Florence, and the last stop was Barcelona, where I’d meet my sister and her boyfriend as they flew over to visit.

Returning from dinner one night, I signed into Facebook to send my mother a message when I noticed an unfortunate pattern of posts in my news feed. There were messages of sadness and strength, but I couldn’t quite piece together what it all meant. Something had happened in Boston – something bad. We flipped on the television and every news station in Barcelona was covering one thing: the Boston Marathon bombings.

Unable to call, I sent messages to friends and family. Luckily my family, although we once lived in Jamaica Plain, has lived in the suburbs for quite some time now and I didn’t have to worry about whether or not they were OK. I had friends who lived in the city, and many who were at the Marathon, but I was one of the lucky ones. Everyone I knew was unharmed – physically unharmed, at least.

My Irish roommates and American friends abroad checked in on me, knowing I was from Boston and would, in one way or another, be affected by the events. When the police were trying to find Dzhokhar Tsarnaev, everyone in Ireland, American and Irish alike, was following the story. It was on the news constantly and we stayed up late just to keep up with it. My roommate from Memphis was engaged and involved, checking the news frequently for constant updates. I remember her saying that she didn’t want to sleep because the story was so gripping and she wanted to be there the moment we found answers.

I was tied to the story and I wasn’t. I wanted so badly to know what was happening and I wanted so badly not to see another TV screen. The story played in every pub, every apartment and every storefront. It was unavoidable, it was gripping, but most of all, it was horrible.

Somehow it lucked out that I was abroad in 2013 or else I would have been there, at that mile mark where the bombs went off. The brief stint of my cross-country career in high school stays with me and I can’t help but feel inclined to support the runners. Jeff Bauman, the man who identified the bomber, ran on the very same team I did in high school, a Chelmsford resident through and through.

What I’ve always liked about the Boston Marathon is that it breaks barriers, it tells real stories about real individuals. The first time I went, I was amazed at the number of 80-year-old runners I saw at the 22-mile mark. The race is hilly, windy, sometimes cold and sometimes scorching hot. Everyone cheers on people that they’ve never met and will likely never see again.

The Marathon, like the city of Boston itself, doesn’t make sense – it defies normal limits. It has a history. It tells stories. And most importantly, it has an immeasurable amount of spirit and support.

For all the “Masshole” stereotypes we Bostonians endure, I’d argue that Boston is most spirited city in America. There is a certain charm, a charisma and an unmatchable, underdog-like attitude that makes us unique. Our little city does big things; even former Celtics coach Doc Rivers agreed that Boston has something no other city does.

When he returned to our city after moving to coach the Los Angeles Clippers, he said, “I tell people all the time – people don’t get Boston, they really don’t. They don’t understand. And I think you have to be a part of it to get it … I don’t think you can get it from the outside.”

The Boston Marathon, like the city of Boston, is pure and real. It can’t quite be explained, and sometimes you have to be from here to understand it because otherwise it just seems too unbelievable. But, as Mark Twain once said, “Truth is stranger than fiction, but it is because fiction is obliged to stick to possibilities; Truth isn’t.” Though Twain wasn’t a Bostonian, I think he had the right idea. The Boston Marathon, like its city, isn’t just stranger than fiction – it’s better.