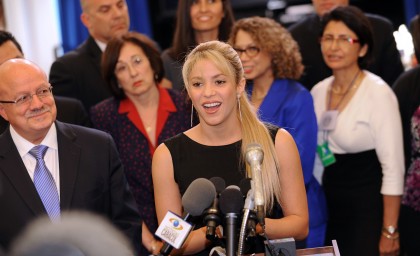 Self-titled and self-empowered, Shakira has returned to her English audience with her 10th studio album, “SHAKIRA,” released on March 21. On it the album, the Colombian native finds new muses from her own life, such as the birth of her first child. Full of songs written about the different emotions inspired by love, Shakira’s unrelenting adoration for her child and husband fill the verses of nearly every song. Shakira draws from all corners of the musical realm, finding inspiration in rock, pop, reggae, country and her usual Latin style.

Shakira opens the album with the experimental “Dare (La La La),” a song heavily influenced by the rising EDM trend. Filled with syncopated beats, the song’s electronic atmosphere, combined with her thickly accented vocals make for a genuinely unexpected but well executed combination of sounds.

The collaborative tracks on the album demonstrate Shakira’s ability to morph into any genre. Pairing up with Rihanna on “Can’t Remember to Forget You,” MAGIC! on “Cut Me Deep” and Blake Shelton on “Medicine,” Shakira impresses even while sharing the spotlight with others. “Can’t Remember to Forget You” is filled with frantic lyrics about scorned love, something Rihanna can definitely relate to. Their voices harmonize exceptionally well, forming a reggae style pop song that complements both artists equally.

On “Cut Me Deep” a heavy reggae inspiration shows its head again through the track’s layered percussion. The soft transition between Shakira and MAGIC! in the song is fantastic, and shows how well Shakira can effortlessly adopt to any sound.

“Medicine” combines sultry Latin guitars with a country vibe courtesy of star Blake Shelton. Reminiscent of her 2001 album “Laundry Service,” Shakira still manages to hold onto her roots on “Medicine,” even with the song’s country leanings.

In yet another sonic experiment, Shakira channels indie rock on “Broken Record.” A vulnerable song, it is accentuated by light drums that work perfectly in cohesion with her softly spoken, romantic lyrics. Sweet and memorable, the song relates to any lost love, as Shakira puts in a strong performance.

Fortunately, Shakira stays true to her roots on songs like “You Don’t Care About Me” and “23.” Similar to her last English album, “She Wolf,” both songs utilize Spanish guitar and  her gravelly voice. Shakira’s throaty intonation is her signature, and it would not be a Shakira album without it.

Shakira leans to the mainstream with a few pop rock inspired songs like “Spotlight,” “Empire” and “The One Thing.” All share an upbeat tempo with a few variations between pop, reggae and a Colombian style sound. Juxtaposing whispery lyrics with heavy guitar, these three songs are energetic, but not the best that the album has to offer.

Shakira has always been known to pull from many different influences, both personal and musical. This allows for her to continuously change her sound so that each album offers something different, which speaks to her ability to unfailingly compose delicately crafted songs that consistently depict her artistic growth. “SHAKIRA” is no exception, as it is clear that she is nowhere near finished with making music for both English and Spanish listeners alike.