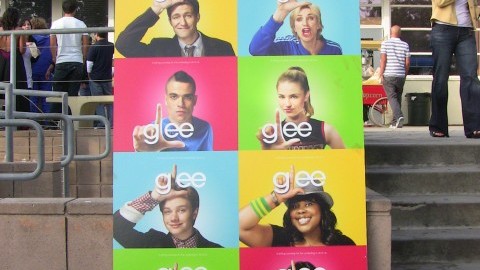 It’s about time. In an episode titled “New New York,” “Glee” finally moves solely to New York City, and it’s … well, fantastic. It may arguably be the best episode to date.

After two long, dreadful seasons of jumping back and forth between Lima, Ohio and New York City, the show’s creator Ryan Murphy decided it was time to pick up the slack and call it a day on Lima, bringing the storyline of the beloved glee club “New Directions” to a sad end. The show now focuses on the lives of the seven friends who hauled their bags from Lima to New York in pursuit of their dreams.

This episode, which resembled “Glee” circa seasons one and two (aka quality “Glee”), reminded me of what I loved about this show in the first place. Quite frankly, I’d lost faith after the last two seasons (the show is currently in its fifth). Choppy storylines, irrelevant songs and out-of-character plots? Definitely not what I signed up for. But this move to New York allows for more character development, better narratives, well-suited songs and an altogether superior show.

It all begins with a time jump: the kids are all living together in Kurt and Rachel’s loft, and even though it’s been months, no one’s actually addressed the fact that this tiny space has become home for too many people.

Rachel (Lea Michele), always graced by the writing gods, learns that her producer is gifting her a town car in exchange for all the “trouble” she’s been through, what with out-of-town “Funny Girl” performances and Santana (Naya Rivera) quitting the show. She, of course, takes her expensive whip for a ride and does what the stars of “Glee” do best – sing. The rest of the cast joins her in a fun rendition of Petula Clark’s “Downtown” as they all meet in Washington Square Park.

Later in the episode, a man on crutches mugs Artie (Kevin McHale) on the subway, stealing his backpack with his laptop inside. Rachel attempts to comfort Artie, telling him that overcoming these experiences make him a true New Yorker, but Artie slaps her with the truth – she’s not a real New Yorker. Rachel then realizes that riding in her town car means she’s lost her sense of the city and creative growth, so she gives up the car and decides to take the subway with Artie.

The two take over underground New York with “Don’t Sleep in the Subway” (another Petula Clark tune). When Artie and Rachel later see the mugger again, Artie pepper sprays the man, who turns out to be a hoarder, and retrieves his laptop.

The time jump finds Kurt (Chris Colfer) and Blaine (Darren Criss) living in domestic bliss, with Blaine waking up early every morning to serve Kurt breakfast in bed and Kurt wondering if they’re back to their “old married couple” ways. Ah, but au contraire, Blaine says, and the couple sings a cute version of Frank Sinatra’s “You Make Me Feel So Young.”

In Kurt’s miming class, however, which is only one of the six classes Kurt and Blaine take together, Kurt really begins to feel the bliss melt into suffocation, and in a hilarious scene, he realizes he’s literally being boxed in by Blaine.

Kurt relays his concerns to his new friend, Elliot (Adam Lambert), who reminds him that what he has with Blaine is special. The two jam out to A Great Big World’s “Rockstar,” with inexplicable crowd surfing and all. It isn’t until he walks in on Blaine planning to redecorate the apartment that Kurt explodes and confesses that Elliot’s right: he and Blaine are losing their boundaries and he needs space. That sentence alone sends Blaine out of the apartment…and straight to Elliot’s.

Only after accusing Elliot of wanting to steal his fiancé and calling him a “glitter vampire” does Blaine settle down and realize that perhaps he and Kurt do need their space. He returns home to tell Kurt he’s moving out, a decision that poignantly contrasts the Blaine of season four, who thought that boundaries were just walls pushing him away and marks true character development for him. Kurt’s afraid they’re moving backwards but agrees that it’s important to protect their relationship, “something that is very precious” to him (and to me).

With Sam (Chord Overstreet) also occupying space in the loft, Blaine (with a nudge from Kurt) takes it upon himself to motivate him to book a modeling job and move out. He inspires him to take on New York City with a duet of American Author’s “Best Day of My Life” in Times Square, and Sam gathers up his courage and finally cuts his hideous “bronytail,” booking a job immediately after. He then leaves the loft, but after two unfortunate roommates (one of which was also named Sam and suffered from a prescription drug addiction), he and Blaine decide to move in together.

As it turns out, no one in New York locks their doors, because in comes Mercedes (Amber Riley), who has moved to the city to find better vibes for her album. She invites Blaine and Sam to move in with her.

The episode ends with Rachel performing “People” in her “Funny Girl” rehearsal and the friends having fun and very much enjoying their lives together in the big city.

Needless to say, I’m certainly looking forward to what else New York has in store for “Glee.”