Indie duo The Both to perform at Pearl Street 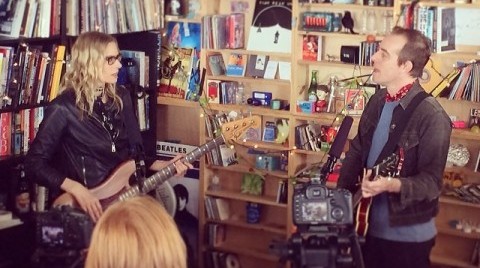 Ted Leo and Aimee Mann, two critically acclaimed songwriters, will perform at the Pearl Street Ballroom on Thursday night. Teaming up as The Both, Mann and Leo will play the opening show of their first major East Coast tour together in Northampton.

Both Leo and Mann are industry veterans, with decades of experience in various projects under their belt. Mann first gained prominence as the lead singer of Boston new wave band ‘Til Tuesday. ‘Til Tuesday had a top 10 hit in 1985 with “Voices Carry,” an achingly personal but incredibly catchy synth-rock song. Uninterested in duplicating the polished, commercial sound of “Voices Carry,” Mann took ‘Til Tuesday in a more personal direction that won critical raves but left the band commercially desolate until their break up in 1990.

Starting with “Whatever” in 1993, Mann began a string of critically lauded, but modest-selling solo albums. On each passing album, Mann’s wry, plaintive lyrical style grew more assured and strong. Larger recognition finally came in 1999 when Mann’s song “Save Me,” written for Paul Thomas Anderson’s epic film “Magnolia,” was nominated for both a Grammy and an Academy Award. “Save Me” showcases all of Mann’s strengths as a songwriter. She packs a great deal of tension into the song’s seemingly relaxed pace and tempo, and makes every last word of her quiet delivery count.

Along with her solo material and The Both, Mann has collaborated with and sung on tracks by artists such as Steve Vai, Ben Gibbard and Rush. She also acts, making cameo appearances on television shows like “Buffy the Vampire Slayer” and “Portlandia.”

Although he has not been around for quite as long, Leo is no slouch either. Having spent his formative musical years in New York City’s hardcore punk scene in the late 1980s and early 1990s, Leo’s music has grown over the years from aggressive punk to a varied, fascinating mix. With his band Ted Leo and the Pharmacists, Leo has acquired a reputation as one of the most hardworking musicians in indie rock. He has released six diverse, hard-rocking albums with the Pharmacists, each containing Leo’s idiosyncratic songwriting style, intuitive lyrics and great vocals.

Although they have known each other since 2001, Leo and Mann only in the last few years began to throw around the idea of collaborating on a project. The first indication to the larger public of what Mann and Leo would possibly sound like together came when Leo and Mann backed Ben Gibbard during his performance of the superb Gibbard-Mann duet “Bigger Than Love” on the Colbert Report in late 2012. Although the emphasis was obviously more on Gibbard and Mann, it was obvious even from that brief example that Leo and Mann’s musical styling gelled well together, and made for an enticing combination.

Their self-titled debut album, released on April 15, reveals a pleasing, easy chemistry between the two. Mann and Leo’s voices accompany each other confidently, augmenting each other’s songs in a quietly dignified way. Even though the songs never stray too much from basic rock/singer-songwriter structure, both Mann and Leo are so adept at their craft that little joys can be found everywhere in The Both.

Watching these two great musicians play off of one another is not something you will want to miss. They will be joined by opener Nick Diamonds, from the band Islands. Tickets are $20 in advance and $25 at the door.