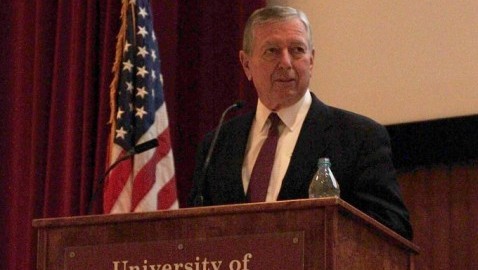 Former Republican Attorney General and former Governor of Missouri John Ashcroft came to talk about liberty on campus on Wednesday in the Student Union Ballroom.

His speech was titled “The Future of America and the GOP: Insights from an Esteemed Political Figure.” However, Ashcroft’s time at UMass soon turned from a talk of liberty to rapid word-fire from the crowd protestors, who had previously stood outside with signs that read “War Criminal,” which was later shouted on several occasions during the speech.

Ashcroft said, “Thank you for standing up and thank you for sitting down” when people did not leave when he began his speech, Ashcroft was involved in controversial matters during his career in the Bush administration. According to Kaufman, Ashcroft is also the “only person in an election to lose his seat to a deceased opponent,” who was Mel Carnahan in the Missouri Senate election in 2000.

Ashcroft’s number-one priority is preventing terrorism, he said. He also spoke a lot about liberty and freedom, using quotes from important places and documents in history including the Declaration of Independence and a quote written on the base of the Statue of Liberty.

“(Americans) are perhaps the only people on the Earth who can’t claim to be better than other people because we are other people,” Ashcroft said. He also said that “liberty preceded government,” and that “rights do not come from governments; they transcend governments.”

“Liberty is the core value of humanity,” Ashcroft said. “My first point is this: Liberty is the number-one value, it’s what makes America a special place.”

In regards to religious freedom, Ashcroft said, “It is against my religion to impose my religion.”

Ashcroft’s speech then turned into a game of words between him and his audience. People began to shout questions from the crowd about things he had allegedly done in his past. Questions were asked about his opinions on the Patriot Act, the situation of possible nuclear weaponry in Iraq, torture (specifically water-boarding – a crowd member asked if they could water-board Ashcroft), prisoners in Guantanamo Bay and the death penalty. Ashcroft answered mostly all of the questions, which led to the cancellation of the planned question-and-answer session at the end of his speech.

“I am not privy to circumstances now,” he said.

In regards to the Patriot Act and roving wiretapping, Ashcroft said that he believes it was “very successful” and that it “was good enough to stop welfare nursing home fraud and narcotics agents, so it was good enough to stop terrorism.” He said the Patriot Act, which was first introduced in 1988, was initially introduced to fight organized crime. However, he argued that it was “hotly debated,” and that it took years to pass.

“You can’t get 88 senators to agree that it’s Wednesday,” he said.

Ashcroft, who often travels to give speeches, did not receive any money from the University to come and speak. “I don’t get one red cent for being here,” he said. Only his transportation and hotel room are being paid for.