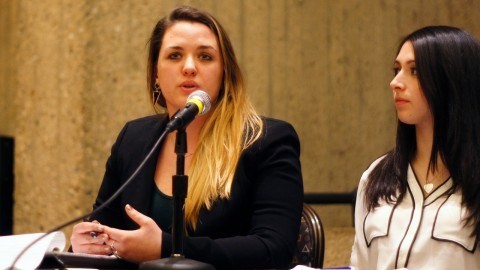 This year’s SGA election has been an interesting process to observe. The invalidation of the Devenney, Miske and Cook (DMC) ticket, the victors of the popular vote, came as a shock to many students and has affixed an unfortunate (and ongoing) epilogue to the tail of a long, exhaustive period of campaigning.

For all candidates involved, these past few months have been taxing and now, despite the recent swearing-in of the second place ticket, the process is not resolved. On April 24, I attended the open judicial hearing between DMC and the SGA Elections Commission. The factors that led to the commission’s decision to invalidate the ticket confound me.

The apparent centerpiece of the complaints filed against DMC is one made concerning the use of a 10 percent off coupon to Campus Design & Copy. During the hearing, this complaint was discussed at considerable length. DMC and SGA Elections Commissioner Rocco Giordano raised questions about “reasonable access” to the coupon. The commission asserted that the distribution of the coupon, from the Hatch eatery for approximately one school week, was not reasonable access. I could not help but question the extent of speculation in the commission’s argument to further this and other points.

The commission asserted that, given the variance of scheduling of classes and other factors, it would not have been possible for all tickets to obtain the coupon as DMC did. I must emphatically disagree. There could have been at least one occasion during which someone associated with each ticket could have obtained a coupon. My argument may be speculative, but the commission’s is equally, if not more so. It is unreasonable to assume that the University’s scheduling matrix inhibited every other ticket’s ability to obtain a coupon.

I must impose upon you the absurdity that such complaints carried so much weight in the commission’s decision to invalidate DMC. During the hearing, the commission argued that with the 10 percent off coupon, DMC was able to print a particular additional quantity of posters and “chops” that resulted in a matching increased number of votes. Have we forgotten the difference between causation and association? Given that logic (and I use the word “logic” loosely here), wouldn’t every DMC flyer torn down (and there were many) reduce equally the number of votes for DMC? I can say from both experience and observation that the presentation of a campaign poster or “chop” has no direct effect on one’s willingness to vote for a particular candidate.

I implore the Judiciary to bring justice, to realize that the Elections Commission has made fantastic speculative leaps in explaining the validity of alleged complaints against the DMC ticket. What is most clear is that the current system is a flawed one, and I unequivocally believe that Ellie Miske, Gabrielle Cook and Emily Devenney would make great strides in fixing it. In its misguided actions, the Elections Commission has not just invalidated the winning ticket in this year’s SGA election; they have invalidated my voice, and all the voices of the constituents of a democratic system that exists solely to serve the student body.