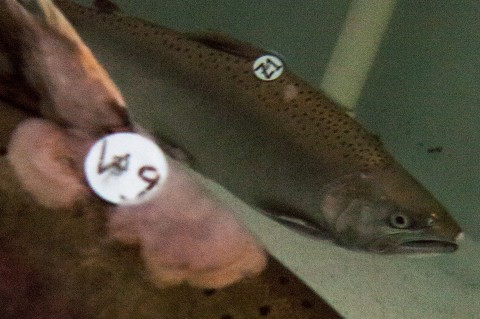 Tagged and awaiting release, Coho Salmon are kept in holding tanks at a conservation hatchery operated by the Monterey Bay Salmon and Trout Project in Davenport, Calif. Drought condtions have cut off access the salmon have to rivers to move from the ocean upstream to spawn. (Robert Gauthier/Los Angeles Times/MCT)

An open letter to UMass:

For the past two years, I have notified faculty who I felt might be interested in what I believed to be an isolated population of native brook trout. In my emails, I stated the following:

“Based on your listed research, I felt you might be interested in a population of native trout located within 20 miles of the UMass campus. As a kid, I grew up in western Massachusetts. We tried to fish an isolated oxbow many times, but usually for pickerel … we never caught any. The oxbow is difficult to fish, so few tried. Recently, I visited an old friend and noticed an impressive brook trout (about 18 inches) mounted on his wall. When I inquired about the fish, I was told it was caught recently through the ice on the ‘old oxbow.’ I was shocked, yet I understood that this population of brook trout has survived for hundreds of years, and could be a valuable source of genetic material.”

My first attempt to contact appropriate faculty met no response. More recently, after a more focused look at faculty research interests at UMass, I contacted Dr. Allison Roy, Dept. of Environmental Conservation. Dr. Roy responded in a timely manner, explained her research interests, and noted she had forwarded my email to two faculty members who are experts in brook trout and conservation genetics and have a long-term population-level study in the area. After 10 weeks, I have not been contacted by either.

Perhaps my excitement over the isolated population of brook trout is misplaced. Perhaps the faculty members contacted have no interest in these trout. Either way, professionally, it would have been courteous to respond.  I have donated to “my department” in the past, but I will reconsider doing so in the future.

This is not the UMass I remember. The legacies of Dr. Robert Bond, Prof. Bill MacConnell, Prof. Joe Mauson, and Dr. Joe Larson deserve better.