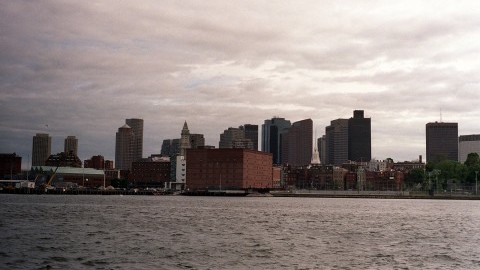 One year following the Boston Marathon bombings, various businesses have taken different steps toward remembering those affected. Mary Ann’s Dance and More teamed up with Mantis Graphics for a second time, selling shirts to benefit those influenced by the bombings.

Hanlon’s husband, Rick, came up with the idea last year to create the shirts after the Boston Marathon, and created a design with Mantis Graphics. He met with Clay Crow of Mantis Graphics to incorporate the Boston skyline into the yellow ribbon that is printed on the blue t-shirts.

All proceeds from the sales last year went directly to The One Fund Boston Inc., a charity formed by Gov. Deval Patrick and Mayor Thomas Menino with the purpose of helping those who were affected by the bombings.

According to the One Fund website, it “is actively participating in efforts to commemorate the one year anniversary on April 15, and is making plans to make a second distribution to survivors this summer.”

The charity managed to collect and distribute nearly $61 million in just over a month to over 230 victims. Hanlon’s business contributed to the fund through shirt sales.

The store will sell the shirts until April 30 at $21 each. All of the proceeds will go to the One Fund again.

There have been some issues with getting the publicity for the shirts because the press release wasn’t immediately picked up, but Hanlon remains hopeful that people will see the shirts in the display window and buy one.

Looking back after a year, Hanlon said, “I know there are a lot of survivors who have come a long way in that one year. It’s amazing to see the strength in those people.”

Shirts are available for purchase until April 30, and Mary Ann’s Dance and More can be contacted at (413) 282-0054, or found at 56 Cottage St. in Easthampton. Direct donations to The One Fund can be made on its website at onefundboston.org.

Catherine Ferris can be reached at [email protected] and followed @Ca_Ferris2.