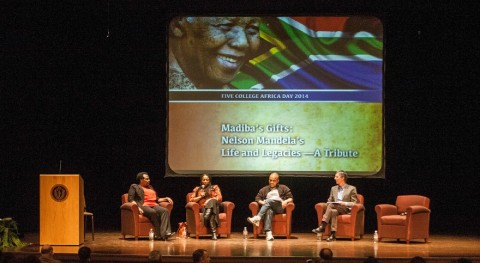 Different cultures, religions and backgrounds gathered in the Campus Center at the University of Massachusetts to commemorate Nelson Mandela and the 50th anniversary of the Civil Rights Act of 1964 at the 16th Annual Freedom Seder on Monday night.

The celebration was organized by the Black Student Union, the Muslim Students Association, the Intervarsity Christian Fellowship, Hillel, the Baha’i Club and the Office of Religious and Spiritual Life. Its purpose was to bring members of different groups together to commemorate several modern liberation struggles and create a sense of unity.

Though it did not target a specific belief, the program’s format was based on the themes of the Jewish Passover Seder. During the Seder, the guests participated in a series of rituals that ranged from eating traditional symbolic foods, singing songs, storytelling and poetry reading; followed by an international buffet and live music by Moonlight Davis.

“It is a good thing when people from different backgrounds, cultures and creeds come together in a positive, respectful way,” Larry Goldbaum, director of the Office of Religious and Spiritual Life on Campus, said.

The organizers of the Seder incorporated the perspective of every background and religion with synchrony. Through the celebration, traditional songs and poems belonging to a variety of cultures were addressed, including “Go Down Moses, Let My People Go,” a traditional Jewish song, and the Black National Anthem, “Lift Every Voice and Sing,” which is of major importance to the African American community.

The first part of the ceremony involved a variety of symbolic foods, from parsley to salt water and orange. Some of these foods represented a single social, cultural or religious group that at some point in history suffered from oppression, while other foods represented topics such as “awareness” and renewal of life.

The participants then proceeded to read the material from several writers, musicians and social activists, including W.E.B Dubois, Malcom X and Maya Angelou, in order to honor all the people who have fought in the battle to bring social equality.

Guests communicated with others throughout the event about their own experiences or opinions concerning discrimination, social injustice, religion and struggles of their ancestors and how these issues affect their daily lives. The purpose of this was to show that the struggle for equality and the eradication of oppression still has a long way to go.

Then, everyone involved in the Seder listened to the famous “I Have a Dream” speech by Martin Luther King Jr, followed by a moment in which the whole group held hands and sang to the song, “We Shall Overcome” by Charles Albert Tindley.

The participants also enjoyed an international buffet that included Aloo Gobi, Chicken Suya, Tofu Rendang and Central Asian Lamb Plov, accompanied by live music where the participants had the chance to share their thoughts about the event.

According to the organizers, The Freedom Seder is based on the belief that whenever people from different communities come together in an atmosphere of mutual respect and friendship, the world becomes a better place.

Cecilia Prado can be reached at [email protected]